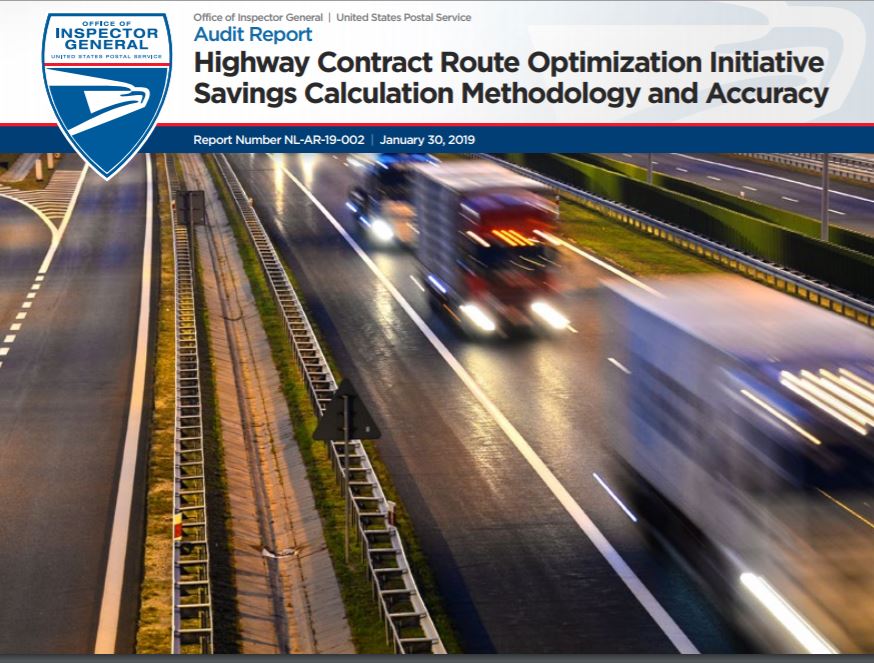 Our objective was to evaluate the Postal Service’s Highway Contract Route (HCR) Optimization Cost Savings methodology and the accuracy of reported savings for fiscal year (FY) 2017.

We judgmentally selected two of the seven Postal Service areas (Pacific and Capital Metro) with the highest and the lowest ratios of reported to planned savings in FY 2017. We then selected six mail processing facilities from these two areas based on route utilization percentages to review underutilized trips. The six facilities were the Los Angeles and San Francisco Processing and Distribution Centers (P&DC) and the Los Angeles Network Distribution Center (NDC) in the Pacific Area; and the Southern Maryland P&DC, Atlanta NDC, and Capital Metro Surface Transfer Center in the Capital Metro Area. We also reviewed the nationwide savings calculated by the STO specialist for FY 2017.

The Postal Service reported savings of about $67 million in FY 2017, exceeding its planned savings goal by about $22 million.

We determined the methodology used to calculate the HCR optimization cost savings was not documented and was inconsistently followed and inadequate. Furthermore, there were no nationwide cost savings from the HCR Optimization Initiative in FY 2017.

This occurred due to lack of standard operating procedures for the HCR savings calculation methodology; lack of requirements for updating the savings calculation for pending renewals/awards; and service change requests that were not previously captured due to timing differences, inconsistent application of the methodology, and insufficient validation of the calculated savings.

We recommended management reevaluate the continuation of the Highway Contract Route optimization cost savings calculation; and, if the program is continued, develop standard operating procedures and automate the methodology for calculating and validating the savings calculation to account for the timing differences, ensure consistent application, and avoid manual calculation errors.