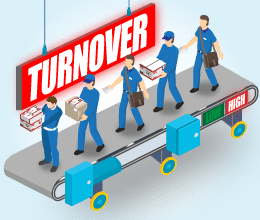 Non-career employees, or temporary workers who do not receive full employee benefits and privileges, make up a significant part of the U.S. Postal Service’s workforce – about 130,000 in fiscal year (FY) 2016. The USPS uses non-career employees throughout its operations.

However, turnover is a problem with temp workers, particularly for the city carrier assistant (CCA) position that delivers mail on designated city routes. In FY 2015, the Postal Service spent about $95.1 million to hire and train new non-career employees or replace those who left, our recent audit report said.

Turnover was higher in FY 2015 than previous years despite the USPS’ concerted efforts to address it by creating a CCA recruitment and retention strategy for field Human Resources staff, managers, and supervisors. In addition, the Postal Service created initiatives for FY 2016 to reduce turnover and improve training.

Non-career employees are vital for providing flexibility, supplementing the regular workforce, and reducing staffing costs. To that end, the Postal Service established a goal of keeping the monthly turnover rate at 2.9 percent for all non-career crafts in FY 2016. It missed that goal this past year, seeing an average monthly turnover rate of 3.6 percent. (The monthly rates of 2.9 percent and 3.6 percent equate to 34.8 percent and 42.7 percent annually.) Had it hit its goal, the Postal Service would have reduced its hiring and instructing costs for FY 2016 by more than $23 million.

Our report identified opportunities for the Postal Service to improve non-career staffing, especially in light of a tightening labor market. For example, USPS could address scheduling flexibility, the physical demands of the job, and supervisory relationships that contributed to non-career employee turnover. These were among the top reasons for leaving in a survey of non-career employees who resigned. Other reasons included low pay, few benefits, and lack of training.

What other ways could the Postal Service improve retention of non-career employees?