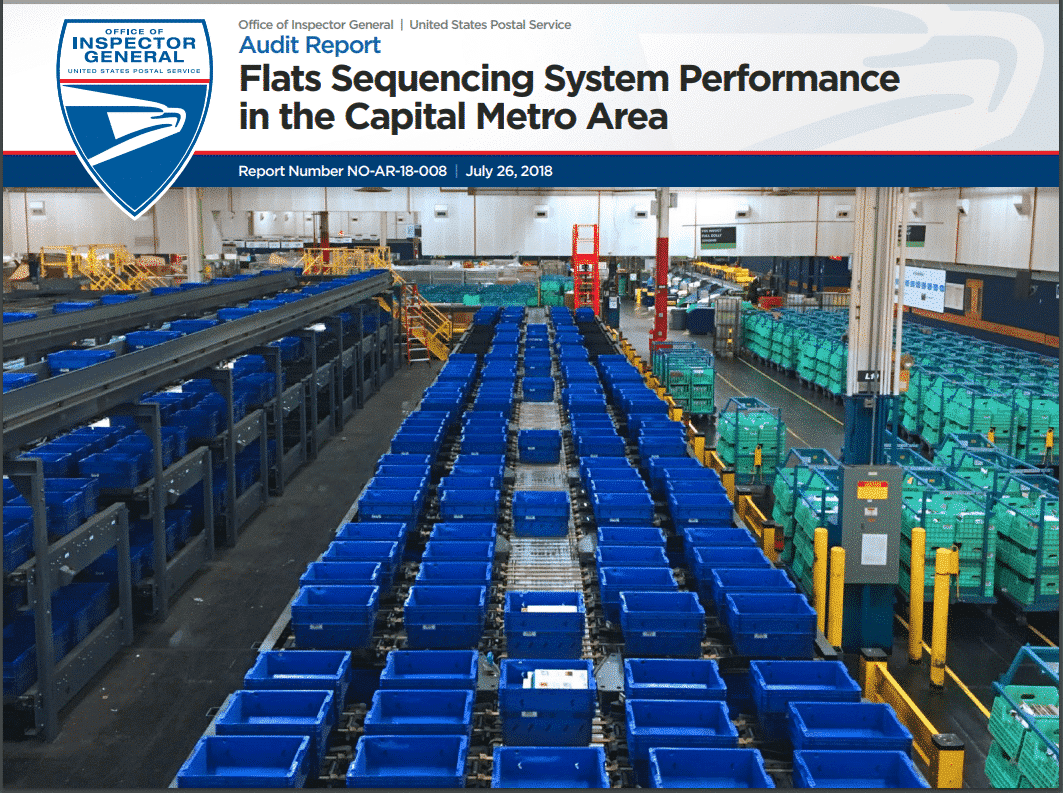 Our objective was to evaluate Flats Sequencing System (FSS) performance in the Capital Metro Area.

The Postal Service completed FSS deployment in August 2011, with a projected per machine throughput of 16,500 pieces per hour and 280,500 pieces per day. The Postal Service also established an average daily runtime goal of 17 hours per machine. Since the initial deployment of FSS machines began in 2008, flats mail volume has declined by almost 10.3 billion pieces, or about 46 percent.

Because of the decline in flats mail volume, management in 2010 reduced the nationwide FSS projected per machine throughput goal to 11,500 pieces per hour and 195,500 pieces per day, for an overall reduction of about 30 percent per FSS machine.

We conducted FSS observations in the Capital Metro Area from February to March 2018 at five mail processing facilities which have a total of 10 FSS machines. We selected the following facilities based on FSS throughput and productivity:

The Capital Metro Area has a total of 18 FSS machines at nine mail processing facilities. This is the first in a series of FSS area audit reports.

We also found that all 18 FSS machines were about 27 percent, or 4.5 hours, below the average daily runtime goal of 17 hours per machine.

At four of the five facilities we visited, management said achieving volume and runtime goals depends on sufficient flats mail volume and they were not sure there was enough volume to achieve these goals. At the fifth facility, management said they are not subject to a volume goal because their FSS is considered a “research and development” machine for testing and improving FSS performance.

About 74 million pieces intended for processing on FSS machines in the Capital Metro Area, or about 23 percent of flats mail, were not processed on FSS machines during that time. This mail is referred to as leakage mail. Instead, about 52 million of those pieces, or about 70 percent, were processed on the Automated Flats Sorting Machine (AFSM), which needs additional letter carrier manual sorting for delivery. The remaining 30 percent of this flats mail volume was either processed on other mail processing equipment or sorted manually.

Management indicated that the flats were not processed on FSS machines because they were not sent to the machines in time to be prepared and run on FSS or the FSS machines rejected them. When this happens, flats mail is processed on the AFSM to avoid delays, or sent to the delivery unit for manual sortation. The Postal Service can measure total leakage through scanning but it cannot identify the cause(s) of the leakage because flats mail leakage is not managed. As a result, the Postal Service will continue processing leakage mail by a method other than the FSS.

More importantly, it is unclear whether processing flats on FSS is actually more cost-efficient than using AFSM. The Postal Service does not have any current studies or analyses to establish the financial benefit or workhour savings achieved when flats mail is processed on the FSS instead of the AFSM. Processing flats mail on AFSM machines and having the carriers manually sequence the flats may be less expensive than processing flats using FSS machines.

Our analysis showed that from October 1, 2015, through March 31, 2018, processing flats mail on the FSS costs about $0.06 per mailpiece compared to about $0.02 for the AFSM. This analysis does not include possible carrier workhour savings from FSS flats mail being in carrier delivery order. Additionally, the Postal Service does not have any current information about carrier workhour savings related to FSS processing. However, we reviewed the average delivery unit workhours for those units that received FSS flats and compared them to those that did not receive FSS flats. We found that from October 1, 2015, through March 31, 2018, the units that received FSS flats exceeded their projected office time by 14 percentage points more than those that did not receive FSS flats. Although this raises questions about the efficiency of using FSS, to validate the exact cause(s), a study should be done to determine the value of FSS flats mail processing and the cause(s) for the difference in workhours at FSS and non-FSS mail delivery units.

Productivity was based on the total number of flats mailpieces prepared and sorted by FSS divided by total employee workhours used to prepare the mail and staff the 18 FSS machines. The productivity ranged from a low of 1,336 to a high of 1,846 mailpieces per hour.

During our five Capital Metro Area site visits, we observed that FSS staffing did not match FSS labor code reports. Specifically, 32 of 302 FSS staff, or about 11 percent, were charging the FSS labor code but not working in the FSS operation. An additional 18 employees were working in the FSS operation but were not using the FSS labor code. Management must ensure employee clock rings are properly completed so labor costs can be correctly attributed and productivity can be accurately measured.

We also found at all five Capital Metro Area sites we visited that flats mail was removed from FSS preparation areas because it could not be processed on the FSS due to its thickness, size, or unreadable address or barcode.

Though we observed various flats mail issues during our on-site visits, none of the five facilities we visited used the electronic Mail Improvement Reporting (eMIR) system, as required, to report the flats mail problems we observed. The eMIR system is used to report business mail quality problems and resolve them with the mailer. Based on Capital Metro Area eMIR system data, from October 2017 through March 2018, eight of the nine Capital Metro FSS facilities reported no flats mail problems. The one remaining facility reported 11 problems, with five problems resolved, four unresolved, and two still open. Management at four of the five facilities we visited said that prior eMIR system reports did not resolve mail problems. Postal Service mailers we interviewed said they received minimal feedback from the Postal Service on flats mail issues.