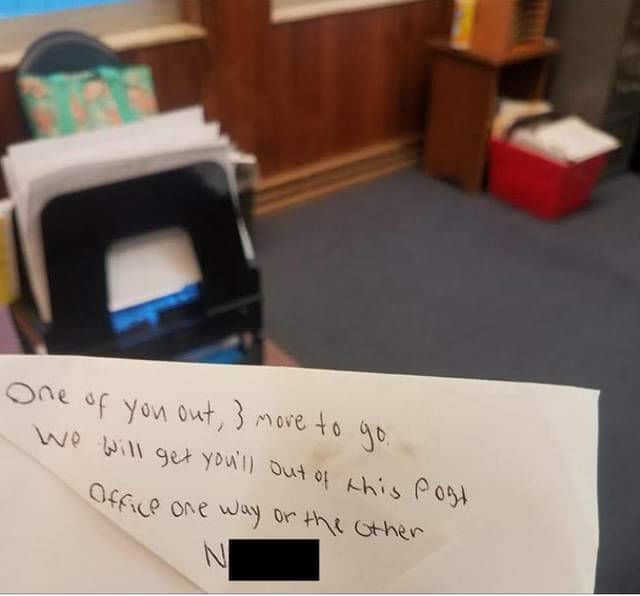 Trish Staten-Ballance, a black employee at the Sedalia Post Office, posted this photo to her Facebook page Tuesday night saying she received the note while at work. The Office of Inspector General is investigating the incident.

By Nicole Cooke – July 25, 2018
The Office of the Inspector General is investigating after a Sedalia Post Office employee received a racist threat this week.

Trish Staten-Ballance, who is black, posted a photo of the note, written on the back of an envelope, on her Facebook page Tuesday night.

The Office of the Inspector General is a federal office that investigates internal misconduct, such as mail theft by an employee, financial fraud, other office theft, health care fraud, and personnel issues such as the incident in Sedalia, according to Jeff Arney, assistant special agent in charge and the public information officer for the Great Lakes area.

As of Wednesday afternoon, Arney said the incident is being investigated as first-degree harassment under Missouri criminal code and the office is working to determine if the threat was made or left by a U.S. Postal Service employee. He said investigations typically involve local law enforcement.

“Right now it’s a preliminary inquiry into what happened, how the finding of the item came about,” Arney explained. “Doing interviews and getting any leads on suspects who may have left that and how the person found it.”