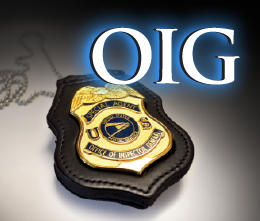 Most people know the start to the TV show Law & Order: In the criminal justice system, the people are represented by two separate yet equally important groups… If we were teeing up the OIG for an introduction in that vein, it might go like this: The OIG mission is to ensure efficiency, accountability, and integrity in the U.S. Postal Service. We do that through independent audits and investigations.

Both our audit and investigative functions are equally important in fulfilling the mission. This week’s blog focuses on the recent work of our Office of Investigations and the special agents who investigate crimes and frauds against the Postal Service. These are their stories.

Over the past few weeks, our office has played an investigative or arresting role in sentencing or settled cases announced by federal prosecutors. These include a case involving a podiatrist accepting kickbacks and a separate case in which a pharmaceutical company admitted it conspired with competitors to fix prices and rig bids.

In the kickback case, a Georgia podiatrist was sentenced for prescribing expensive compounded medication that was ultimately paid for by a federal program providing low-cost medication to members of the U.S. Armed Forces.

In the price-fixing case, a pharmaceutical company that produces generic drugs agreed to pay more than $7 million in penalties and damages and also cooperate with ongoing investigations into the generic drug market. As one of our special agents noted in a Department of Justice press release about the case, the Postal Service spends hundreds of millions of dollars every year on health care associated costs, including expenses related to prescription drugs. Our office, with others, “will aggressively investigate those who would engage in this type of harmful conduct.”

Please visit our document library to see all news releases about cases that involved us and that have resulted in either convictions or settlements.

And if you need to report fraud, waste, or abuse, click here to reach our Hotline.