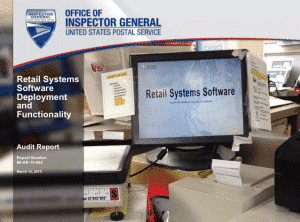 Functionality issues delayed completion of the pilot. In addition, management stopped RSS deployment in December 2014 because of an unrelated temporary national freeze on information technology deployment. RSS was deployed at only 396 of the 700 planned pilot sites as of December 2014.

The Postal Service now plans to deploy RSS at 17,219 sites between February and December 2015. In January 2015, 1 month before deployment begins, management plans a 50 site test of the Office Data Import tool, which converts point-of service data for import into RSS. Management does not know if Office Data Import tooI testing will be successful or if it will affect the start of the national deployment.

The current deployment schedule is aggressive, making successful deployment in 2015 challenging. In addition, existing and future functionality issues may require more funding, which would further reduce the expected return on investment.