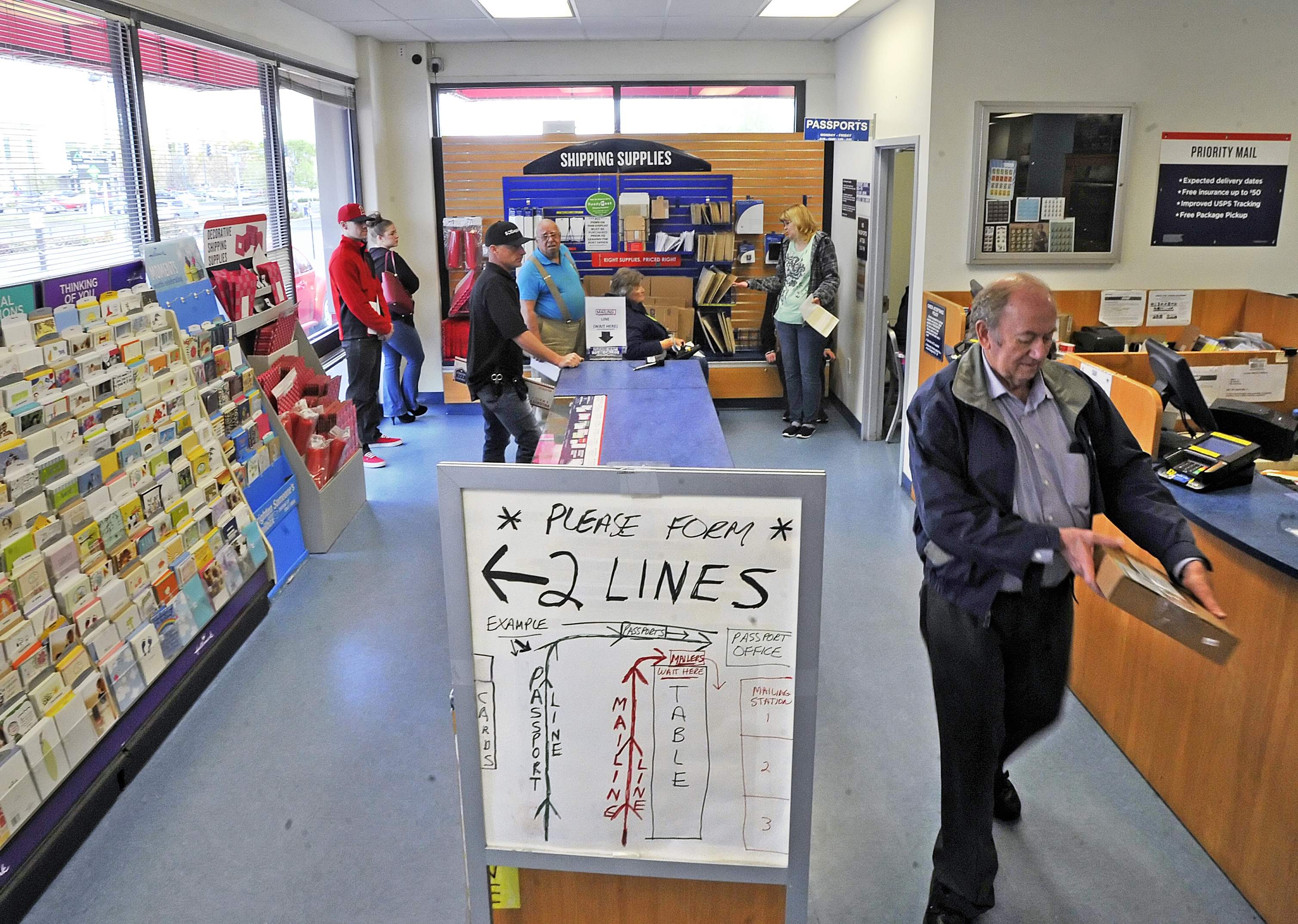 Some local residents say the line for passports at the downtown Medford post office can become too long. [Mail Tribune / Jamie Lusch]

By Damian Mann – April 21, 2017
Frustrated local residents say they have endured long lines and long waits to get a passport at the cramped downtown Medford post office.

“With only one post office employee, who seems very stressed out, managing all the necessary paperwork for all the passport applicants, this is a perfect and very sad example of how ineptly the government manages the needs of the people,” Medford resident Lara Enders said. “This is an outrage.”

Compounding the problem is the small waiting area in the post office with two lines forming side by side, one for postal service and the other for passports.

To make the line situation a little clearer to understand, one postal employee made a large, hand-drawn sign near the counter that alerts customers that there are two lines, one for passports and one for mail.

Peter Haas, spokesman for the U.S. Postal Service, said, “We are assessing the traffic patterns there at Medford and working to make necessary adjustments.”

Other parts of the country have seen an increase in passport applications through the post office. In Salinas, California, The Californian featured an April 14 article about lines winding around the post office building and plans to expand the operation to handle three times the volume.

Haas said those seeking passports should generally expect a longer wait than those in the postal line.  He said there are a lot of complexities to the passport application process, and sometimes entire families show up at the post office to get their passports, which makes the line seem even slower.

Anders said the passport worker who helped her family conducted himself professionally despite the pressures.

“He did a fabulous job, but his anxiety level is through the roof,” Anders said. “He told me that when he sleeps at night, he keeps dreaming about signing all the documents. It was really disheartening to see that.”

Anders said a month ago she arrived almost an hour before the passport office in the post office opened at 9:30 a.m. She said it took two and a half hours from the time she stood in the line until the time she left. Children were sitting on the floor while waiting, she said.

Anders estimates that each passport transaction takes about 15 to 20 minutes, so she doesn’t understand why the post office doesn’t have more workers for rush times, particularly around holidays. She said three people manned the postal desk, but only one for the passport office, which had a longer line.

When she left, Anders said, “There was a line almost all the way to the exit door.”

Peter Sage, a former county commissioner, said he recently saw firsthand the long lines and thinks the passport office has more customers recently because of the increasing requirements of U.S. citizens to provide enough identification during travel.

“The people in line were already tired and grouchy, and it was a long line, and it was only 10 a.m.,” Sage said. “This was shocking to me that people were cooling their heels in a long, slow line.”

Sage said he avoided standing in the line because he was able to prepare much of the paperwork for his passport online and could just drop the materials off.

First of all, make sure you get a passport photo in advance, and then make sure you have scheduled sufficient time to wait in line. If possible, choose a time when there will be fewer people in line.