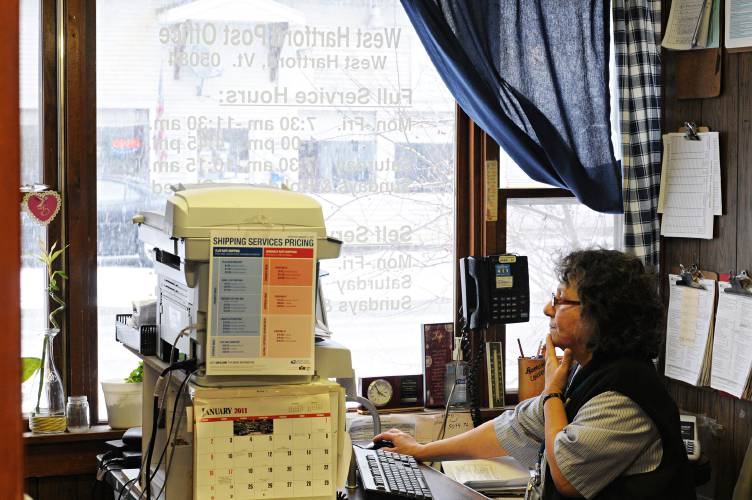 By Jordan Cuddemi – August 19, 2019
BURLINGTON — An Upper Valley postmaster acted in “extreme bad faith” in overseeing a letter carrier from North Pomfret, including falsely accusing him of repeatedly striking her in the head with a five-pound scanner, a federal judge ruled earlier this month.

U.S. Court of Federal Claims Senior Judge Loren A. Smith also awarded Brian Bowles, who was acquitted of a criminal charge in 2013, more than $72,000 in damages for wrongful termination by the United States Postal Service and sent a copy of his decision to federal prosecutors, suggesting that Hartford Village Postmaster Rosi O’Connell be investigated for perjury.

“Ms. O’Connell’s false accusations resulted in the plaintiff standing trial for an assault he did not commit. It also serves as the prime example of a government supervisor acting in extreme bad faith,” Smith wrote in the Aug. 8 decision.

“As Ms. O’Connell repeatedly perjured herself on the stand and engaged in incessant improper conduct as a government employee, the Court directs a copy of this decision to the United States Attorney for the District of Columbia for further investigation and action.”

Bowles, who now lives in South Burlington, worked as a contract letter carrier for the postal service, with O’Connell serving as his “administrative official.” She claimed in April 2012 Bowles hit her over the head with the portable scanner at the Hartford Village post office, but a Windsor Superior Court jury in December 2013 acquitted him of the simple assault charge after deliberating for less than 30 minutes.

O’Connell, who had no signs of trauma to her head after she claimed Bowles attacked her with the portable scanner, made up the attack, Smith wrote. The judge also said that O’Connell would likely have been seriously injured or even killed if she had been hit three times in the head with the five-pound scanner, as she asserted.

Following the ordeal, Bowles in 2013 sued the Postal Service for breach of contract and bad faith termination, ultimately winning the case with Smith awarding Bowles about $72,400 in damages.

A separate but parallel civil lawsuit Bowles filed in 2014 in U.S. District Court in Vermont against O’Connell and her husband, Dennis, also wrapped up this year, with the parties settling on March 5. Bowles received $107,000 in that settlement, according to his attorney, David Bond, of Burlington.

“While Mr. Bowles is pleased with the court’s decision, he is above all else happy to finally achieve total vindication in a dispute that has been working its way through the courts for more than seven years,” Bond wrote in a news release earlier this month. “Reclaiming his reputation as a peaceful and honest member of society is the most important reward of all.”

In the meantime, O’Connell, who emigrated from Peru in 1980 and was previously postmaster in West Hartford until the location was wiped out by Tropical Storm Irene, is still employed by the USPS. She declined to comment inside the Hartford Village Post Office on Monday.

Messages left for the attorney who represented her in the district court matter, John Willey, of Springfield, Vt., weren’t returned.

On Monday, Bowles said in an interview that he has moved out of the Upper Valley and taken a job in the restaurant field. He said he is “doing better than before” but is continuing to work through the emotional aspects associated with being wrongly accused. It not only has put a strain on him, but also his relationship with some of his family members.

“This whole thing was a made-up fairy tale and I am shocked at how far this fairy tale went,” said Bowles, now 47. “It’s mortifying.”

Bowles said he doesn’t think he could ever work for the Postal Service again. He brought several of his concerns to USPS management over the years, including problems with receiving payment for hours worked, and they fell on deaf ears, he said.

Bowles ultimately made the decision to quit his job at the Postal Service on April 26, 2012, the same day O’Connell lodged the accusation against him. That accusation followed a period of harassment in the workplace, Smith wrote, including O’Connell also fabricating a verbal assault. The USPS ultimately terminated Bowles’ contract for failing to provide services according to the terms of the contract.

“All of these instances of abuse show that USPS breached the implied covenant of good faith and fair dealing, preventing Mr. Bowles from continuing performance of his contract with USPS,” he wrote. “(Bowles) has met the high standard of showing bad faith on the part of the government by clear and convincing evidence of specific intent to injure (him).”