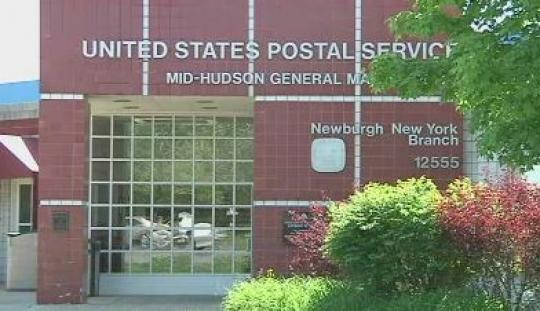 (January 11, 2015) The mail is slowing down again, but it’s not clear how much. There’s good reason to be believe, though, that it will more than the Postal Service is saying.

The first slowdown took place in July 2012, when the Postal Service implemented phase one of the Network Rationalization plan, which closed about 150 mail processing plants and established interim service standards that eliminated overnight delivery for about 20 percent of the mail that had been getting it.

The mail slowed down again in March 2013, when the Postal Service implemented its Load Leveling plan, which added a day to the delivery of much Standard Mail so that ad mail normally delivered on Monday could be pushed to Tuesday.

Then on January 1, 2015, the Postal Service began implementing phase two of Network Rationalization.  Service standards for First Class Mail were relaxed yet further — no more overnight delivery for any single-piece mail, and an extra day of delivery time for about half of all First Class Mail.  The change paves the way for closing 82 more processing plants and eliminating thousands of jobs.

The Postal Service has not put out a lot of information about how much mail will be affected by the new service standards, and the estimates that have been provided are inconsistent and a little misleading.  That may be because postal officials want to limit the damage the changes could have on mail volumes and revenues.

Relaxing service standards is, after all, another form of raising postal rates.  It’s like when the candy bar gets smaller and the price stays the same.  For mailers, such hikes usually mean they send less mail.

When the Postal Service was planning Network Rationalization back in 2011, it wanted to know how reducing service standards would affect mail volumes.  It contracted with a market research company to survey mailers about how they would react.

The market research study showed that mailers would significantly curtail their volumes.  The losses to the Postal Service could top $5 billion a year in gross revenues and $2 billion in profit, which would have erased the savings from the plant closures.

The Postal Service buried the study, had another one done instead, and tweaked the format and questions to come up with more palatable results.

Now the Postal Service is trying to downplay the scope of the changes in service standards in order to minimize the impact on mail volumes and revenues.

“The bottom line is this”

A USPS Fact Sheet issued in December 2014, shortly before the service changes went into effect, poses the question, “Won’t this slow down service?” and then provides this answer:

That makes it seem as if the mail is going to slow down by just two or three hours when in reality much of the mail will be delivered a full day later. Providing an average delivery time like this is misleading and doesn’t really capture what the changes will mean.

Earlier this week, the Postmaster General tried to downplay the significance of the changes in another way.  During the Q & A after his speech at the National Press Club on January 6, the PMG explained how it will be more efficient to operate fewer plants for more hours per day and to get more work out of 6,700 letter sorting machines.  The PMG then went on to say the following:

“The bottom line is this.  With the exception of the holiday and your birthday, okay, you think about your own mail box. When is the last time you got a piece of mail that had a stamp on it?  Yeah. You don’t get it.  This whole change represents at most 4% of the mail.  We think it’s closer to about 2.5%. So you can’t hold an entire system hostage and continue to run up debt and continue to avoid making investments over 2% to 4% of the mail, and that mail is, unfortunately, for us going away at the fastest pace.”  (The video and transcript are here.)

Apparently the PMG did not get that USPS Fact Sheet.  It says, “In January 2015, the Postal Service will change its First-Class Mail service standards, which will affect roughly 14 billion pieces of the total volume (or 9%) and up to 16% of First-Class Mail. The affected volume represents primarily single-piece First-Class Mail.  The majority of this mail will be delivered in two days instead of one.”

So while the PMG was telling the Press Club that the change would affect 2.5 percent of the mail, the Postal Service was acknowledging that it would impact 9 percent.

The bigger estimate is more realistic, but even it probably lowballs the numbers by a significant amount.  As the following analysis will show, the changes in service standards could slow down 80 percent of single-piece mail, half of all First Class mail, and over 20 percent of total mail volumes — several times what the PMG told the Press Club.

Before & After Network Rationalization

Here’s a table showing the differences in delivery times before and after Mail Processing Network Rationalization (MPNR).  It shows the final quarter of fiscal year 2011 — under the old service standards — and a projection for what would happen when the new service standards went into effect.  The table comes from page 90 of the Advisory Opinion on Network Rationalization and Service Standards prepared by the Postal Regulatory Commission, and it’s based on testimony provided by the Postal Service (p. 191-193). 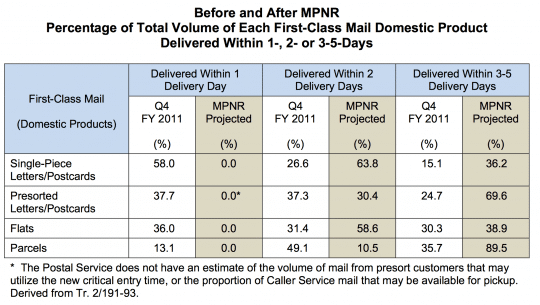 The situation with presort mail is more ambiguous.  According to the new standards, overnight mail will continue for intra-SCF mail (i.e., mail originating and destinating within the same Sectional Center Facility) that is presented at the processing center before a particular time of day (the “critical entry time”) in the particular manner specified by the Postal Service (presorted, containerized, etc.).  But it’s not clear how much mail will meet these specifications.

As the asterisked note on the PRC’s table indicates, the Postal Service did not want to offer an estimate for how much presort mail would qualify for overnight delivery, so the table uses zero.

Read more: How the new service standards may slow down much more mail than the Postal Service is saying | Save the Post Office.