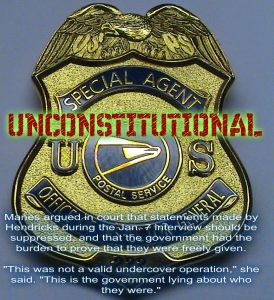 Agents went so far as to set up a phony business to lure their target – 41-year-old Brian W. Hendricks – into a 7 ½ -hour deep-sea fishing expedition. They also duped him into an interview with an undercover agent posing as a vocational rehabilitation specialist.

Throughout the investigation, agents of the U.S. Postal Service’s Office of Inspector General secretly videotaped Hendricks, a former Marine sergeant who served in the Middle East. Much of that surveillance came from a camera mounted on a utility pole outside his Vancouver home.

“It’s truly troubling the government would set up 1,000 hours of surveillance,” Jones said.

Hendricks is charged with fraudulently obtaining $102,942 from early 2011 to the middle of last year while purporting that he was disabled.

During Friday’s hearing, Hendricks said that the U.S. Department of Veterans Affairs had given him a 90 percent disability rating – primarily for post-traumatic stress disorder, depression and anxiety, but also for knee and spine problems. He noted that he had been involved in motor vehicle accidents at Marine Corps Base Camp Pendleton, Calif., and in Jordan.

Hendricks was honorably discharged from the military in early 2002 and later that year went to work for the U.S. Postal Service in Vancouver.

Eight years later, a government tow truck in which he was a passenger was struck by another vehicle. Hendricks filed a claim with the U.S. Department of Labor’s Office of Workers’ Compensation Programs, complaining of back pain and sciatica, and was awarded compensation of 75 percent of his regular pay (about $2,600 a month), according to the indictment. 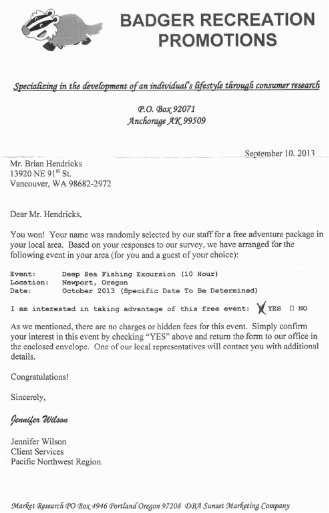 On September 10, 2013, agents mailed Hendricks a notice under the letterhead of a fictional company – “Badger Recreation Promotions” – to let him know he and the guest of his choice had won a 10-hour deep-sea fishing expedition in Newport.

Hendricks took the bait, making his way to the central Oregon coast for the excursion, which lasted more than seven hours. The boat, as it happens, was loaded with undercover agents and hidden cameras.

“During the trip,” the government alleged in its indictment, “Hendricks walked, stood, bent at the waist, knelt, and lifted objects both aboard the vessel and on dry land without apparent discomfort or abnormal limitations.”

“The reality is that Mr. Hendricks’ participation in the fishing trip was far from ‘able bodied,'” Manes wrote. In fact, she noted, a deckhand interviewed by the defense team confirmed that Hendricks spent most of the excursion in the cabin complaining of back pains and spasms so severe he threw up. Hendricks caught one fish.

Jones pointed out in court that the fish, a cod weighing no more than 5 pounds, scarcely offered the fight of a large salmon.

On Dec. 20, 2013, investigators sent Hendricks a letter by certified mail. The missive, under Postal Service letterhead, told him he was scheduled for a Jan. 7, 2014, appointment with a contract vocational rehabilitation specialist at a hotel near Portland International Airport.

An undercover agent, Jonathan Ulrich, posed as the specialist and asked Hendricks a series of questions about his capacity to perform other work for the Postal Service and to decide whether he deserved ongoing disability compensation, court records show. A team of agents and a technical officer secretly videotaped the 1 hour, 45 minute interview.

Hendricks filled out a questionnaire, noting that he considered himself “totally disabled” and indicated that he suffered from severe pain and could stand, sit and walk “as tolerated.” He also said he could not kneel, squat, climb, bend, reach or drive.

Manes argued in court that statements made by Hendricks during the Jan. 7 interview should be suppressed, and that the government had the burden to prove that they were freely given.

“This was not a valid undercover operation,” she said. “This is the government lying about who they were.”

Jones said he would rule soon on whether he would suppress Hendricks’ verbal and written statements.

via Did agents go too far by setting up sham fishing trip, posing as rehab therapist to catch accused fraudster? | OregonLive.com.