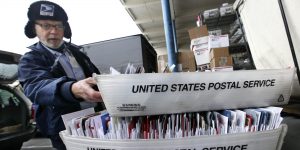 In the pay period from Dec. 13 to Dec. 26, overtime increased 15% over the same period last year, while total workhours were up more than 6%, according to a USPS report released this week.

The typical postal worker put in more than 8 hours of overtime per week during that period. For several groups of employees – notably mailhandlers, vehicle service drivers, and city carrier assistants – the average was more like 12 hours…

…During the last quarter of calendar year 2015, overtime was 9.5% higher than a year earlier, with total workhours up 2.6%. The agency ended December with 652,000 employees – 11,000 more than it had a year ago – with the ranks of clerks and postal support employees (PSEs) seeing the biggest gains.