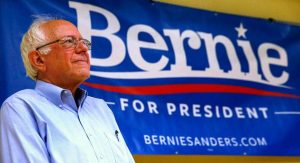 Web News Article #: 002-2016
01/06/2016 – In a speech given just blocks from Wall Street, Sen. Bernie Sanders promised to implement postal banking as one of the ways to fix the country’s broken and corrupt financial system.

“If elected president, I will rein in Wall Street so they can’t crash our economy again,” Sanders said on Jan. 5.

Sanders vowed to break up banks that are deemed “too big to fail,” pledged to provide Americans with affordable banking services, and offered several other solutions, including:

Regarding postal banking, he said, “The reality is that, unbelievably, millions of low-income Americans live in communities where there are no normal banking services. Today, if you live in a low-income community and you need to cash a check or get a loan to pay for a car repair or a medical emergency, where do you go?

“You go to a payday lender who could charge an interest rate of over 300 percent and trap you into a vicious cycle of debt,” Sanders said. “That is unacceptable.

“We need to stop payday lenders from ripping off millions of Americans. Post offices exist in almost every community in our country. One important way to provide decent banking opportunities for low income communities is to allow the U.S. postal Service to engage in basic banking services, and that’s what I will fight for,” Sanders said.