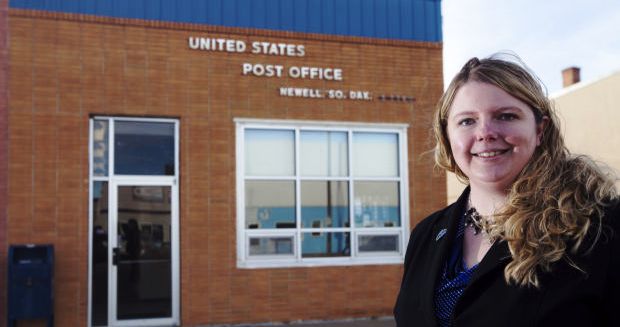 Anna Hermanson moved to Newell last year and was surprised when she received a $34 bill from the U.S. Post Service for a post office box. The Postal Service since has backtracked on a policy that required some local residents without mailboxes to rent a post office box to receive mail.

By Tom Griffith – February 23, 2015
NEWELL | A well-researched complaint by a curious Newell resident could save her and some of her neighbors from paying a fee for getting mail.

As a result of Anna Hermanson’s diligence, the U.S. Postal Service has backtracked on a policy that required some Newell residents without mailboxes to rent a post office box.

Meanwhile, the town’s mayor said last week that misinformation from the Postal Service had prompted some residents to install mailboxes in public rights of way, interfering with city snow removal and causing drainage problems.

When Hermanson moved to Newell last year, she received a $34 rental bill for a post office box.

“I had lived in other communities where we were not charged for a P.O. Box when USPS didn’t deliver mail to our homes,” Hermanson said. “I was a little surprised because I was never charged in other towns, including Edgemont and Colman, S.D. I asked the lady at the post office about it, and she said I had to pay for my post office box.”

Hermanson said while she personally wasn’t bothered by paying for the box, she worried some local residents, thinking they had no other option, might just pay the bill.

“There are many in our community who are poor people who can’t afford that,” she said. “I was surprised (the Postal Service) would take advantage of those people in such a poor community.”

So Hermanson went to work, searching the Internet and downloading USPS policies, procedures and regulations. What she found validated her belief that residents of a town not served by home delivery or rural mail carriers were entitled to a no-fee post office box.

“In the postal codes, there are references to forms people need to fill out so they are not charged for their P.O. box,” she said. “I’m personally OK with paying for it, but I work for the government, and we’re supposed to follow the regulations. It doesn’t sit well with me.”

When contacted about the issue last week, Belle Fourche Postmaster Anne Fickbohm, who also has administrative responsibility for the Newell and Nisland post offices, declined to comment and referred media queries to a USPS spokesman in Minneapolis.

That spokesman, Pete Nowacki, who served 13 years as a small town postmaster, initially said that under certain circumstances, residents of Newell are entitled to a no-fee post office box.

“Every resident, every customer, has the opportunity to get some form of free delivery,” Nowacki said, citing USPS code 4.5.2 Free Group E. “Unfortunately, without knowing this customer’s actual physical address, I can’t tell you why her request for no-fee was denied. My strong suspicion is that she lives in an area that is served by a rural carrier route or a highway contract route.”

When the Journal provided Nowacki with Hermanson’s street address, that strong suspicion changed, and Nowacki said Hermanson indeed was entitled to the free box.

“She fits the criteria, lives within a quarter-mile of the post office, and a rural carrier doesn’t service her street, and we cannot extend delivery down that street,” Nowacki said. “Newell is a little different than pretty much any other place of I know. In any event, she is going to get the no-fee box, or certainly the offer of it.”

Nowacki said it is difficult to determine how many Newell residents would be be eligible for the no-fee post office box, and he encouraged residents with questions to contact Fickbohm, the Belle Fourche postmaster.

When informed of the re-interpretation of USPS guidelines, Hermanson said she was delighted the Postal Service elected to follow its own rules and regulations.

“I am an analyst, so I am used to looking into government policies and codes,” she said. “I also run an ethics committee, so I always want people to act responsibly. I am glad the Postal Service has reviewed their policies and that they are going to follow those policies and regulations.

“I’m glad I was able to help and make a difference in the community as well,” Hermanson added.

Meanwhile, Newell Mayor Mike Wolff said the town of 608 residents was still grappling with misinformation from the local post office that led many to install mailboxes on public rights of way.

“The post office has allowed some residents to put up a mailbox, and the rural carrier will deliver to it,” Wolff said. “But the problem is (the Postal Service) never talked to anybody at the city about it, and a lot of mailboxes have been put up in rights of way instead of on private property.”

Wolff — who said he had been mayor “forever,” but in fact, for just seven years — said the new mailboxes have been a problem only when the city does periodic work in the rights of way.

“It’s not been a big issue, but when we clean out a drainage ditch or plow during a blizzard, then it’s an issue,” he said. “They can create a lot of problems for our Public Works Department.”

Wolff said he had discussed his concerns with the post office, and the city had passed an ordinance governing where mailboxes could be installed. The ordinance requires residents to submit an application for the installation, which is then reviewed, approved or modified by city employees, he said.

There is no fee for the mailbox permit, Wolff said.

via Determined Newell resident calls foul on Postal Service and wins the argument.