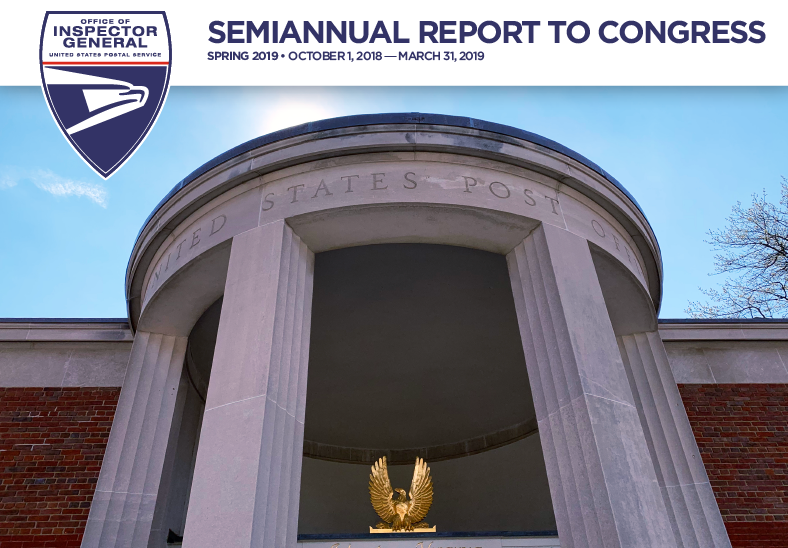 It was an especially lively six-month period covered by our most recent Semiannual Report to Congress – October 1, 2018 through March 31, 2019. The period included the partial government shutdown in December, and January saw the official appointment of our acting Inspector General to the IG position – only the third IG in our 20-year history. And then there’s all the work we did.

The SARC serves as one way we fulfill our mission of ensuring efficiency, accountability, and integrity in the U.S. Postal Service. We do that through independent audits and investigations. In this six-month period, our audits not only focused on operational issues, but also encompassed a wide range of topics, including improvements to the Postal Service’s ethics program, effects from changes in the USPS operational window, and new ways to invest postal retirement funds.

One especially topical report – initiated by a congressional request – was our audit of Postal Service controls over the release of personnel information.

Our investigations continue to illustrate the growing challenge of illicit drugs in the mail and mail theft generally. We are seeing a steady increase in mail theft complaints and, in the case of illicit narcotics, we are finding more outsiders that deliberately enlist the aid of postal workers to divert drug packages sent through the mail.

The quick overview: During this period, we issued 36 audit products and white papers, and the Postal Service accepted 87 percent of our recommendations. We completed 1,199 investigations that led to 396 arrests and nearly $67 million in fines, restitutions, and recoveries, more than $26.5 million of which was turned over to the Postal Service.

Many of the audit reports and white papers we released were featured in this blog and on our other social media platforms as another way to engage stakeholders. Please take a few minutes to read though the Semiannual Report to Congress and then let us know what you think.