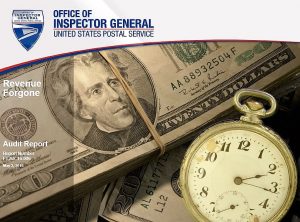 Background
When Congress put the U.S. Postal Service on a self-sustaining basis in 1971, it continued to subsidize the mailing costs of such groups as the blind, non-profit organizations, local newspapers, and educational material publishers by providing an appropriation to the Postal Service to cover the revenues that were given up, or “forgone,” in charging below-cost rates to these groups.

The Revenue Forgone Reform Act of 1993 (Act) eliminated appropriations to support reduced rates for non-profits, transferring costs to other mailers. The Act retained free postage for the blind and overseas absentee balloting. The Act required annual appropriations of $29 million from fiscal years (FY) 1994 through 2035, totaling $1.218 billion, for revenue forgone, deferring payments to the Postal Service for services it provided in FYs 1991 through 1993 and during the phase-in period through FY 1998 for non-profits and other mailers impacted by the Act.

The U.S. Postal Service Office of Inspector General recently issued a report discussing the history of revenue forgone and the challenges with the appropriations process. Our objective was to examine revenue forgone for discounted and free public services mandated by the Act.

We believe revenue foregone should be treated as a traditional loan with interest, similar to the process the Postal Service follows for its borrowings. The Postal Service has borrowed $15 billion from the U.S. Department of the Treasury (Treasury) and is paying interest on the outstanding amount. Using the same interest rates charged to the Postal Service on 1-year Treasury loans, the most conservative rate, the $1.218 billion, less appropriations made through FY 2016, would be $1.6 billion as of FY 2016. Due to the uncertainty of the annual appropriations since FY 2000, we suggest full repayment be made, eliminating the need for future appropriations.

What the OIG Recommended
We recommended management pursue legislative changes that would allow $1.6 billion – the remaining amount owed plus interest through FY 2016 – to be applied against the Postal Service’s outstanding loans from the Treasury.