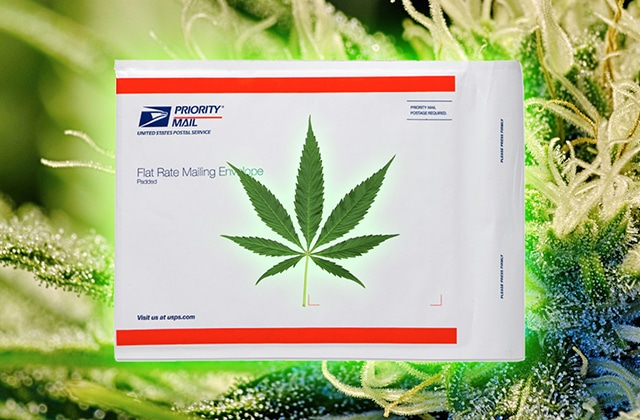 By Steven Nelson – November 16, 2016
It’s no surprise that with about a half-million employees, some U.S. Postal Service workers are enticed by the prospect of free marijuana when the drug’s telltale odor seeps from a package.

But when the postal service inspector general’s office looked into the handling of such packages at seven facilities across the country, it found few safeguards to prevent internal theft.

At one facility, management was unable to explain why a cage used to store suspected pot mail had its lock broken. At another, the suspect packages were left in an unlocked office. At a third, they sat unguarded on a table.

The audit, completed in October after on-site visits early this year, comes amid high-profile instances of postal workers stealing drug mail or using their positions to profit from it.

An Illinois postal worker was charged with knowingly delivering pot mail in September, busted by a tip to the postal inspector general. In May, two workers were charged with stealing drugs from at least 16 packages at Chicago O’Hare International Airport. And in the nation’s capital, three workers were accused in August of taking bribes to deliver pot.

A public web posting last month noted the audit report’s existence but said it would not be released “due to concerns that some of the information was sensitive and thus protected under the Freedom of Information Act (FOIA).”

Indeed, the document was thoroughly redacted when offered to U.S. News following a FOIA request. The ratio of withheld content rivals censorship of FBI notes on the Hillary Clinton email investigation and legal reasoning on killing Americans with drones.

Three FOIA redaction codes are applied to text of the document. One claims protection of law enforcement investigations, another protection of individual safety. But the most common code is a catch-all specific to USPS that protects “information of a commercial nature, including trade secrets, whether or not obtained from a person outside the Postal Service, which under good business practice would not be publicly disclosed.”

Shocking tales of workers taking home marijuana – should they exist – are covered by yellow redaction boxes.

The report’s intended takeaway was not redacted, a recommendation in favor of USPS adopting “a nationwide policy for handling, tracking and providing additional security for packages suspected of containing marijuana to reduce the risk of these packages being lost or stolen.”

Postal workers committing a redacted but guessable misdeed, the report warns, “could expose employees to harm or danger, foster criminal activity, adversely affect drug investigations and prosecutions, and negatively impact the Postal Services’ brand and the integrity of the mail.”

Agapi Doulaveris, a spokeswoman for the inspector general’s office, said “we cannot comment above and beyond what was released in the FOIA.”

Paul Krenn, a spokesman for the U.S. Postal Inspection Service, which polices the mail system, says the report “identified an opportunity that can be addressed by leveraging existing guidance and handling protocols to further streamline and simplify the handling of suspect packages by Postal Service employees.” He says that will be a near-term goal.

A spokeswoman for the U.S. Postal Service did not immediately respond to a request for comment.

Though eight states and the nation’s capital have adopted laws allowing adults 21 and older to use marijuana recreationally, with many others allowing medical use of marijuana, possession of the drug remains a federal crime, as does using the USPS to ship it, even within or among jurisdictions with regulated markets. When contraband is suspected, it’s referred to postal inspectors for further review.

Thus far, state-level pot legalization – beginning with 2012 votes in Colorado and Washington and the 2014 debut of retail stores – has not been accompanied by a national increase in pot mail busts, according to data compiled through fiscal 2015. Statistics for fiscal 2016, which ended Oct. 1, have yet to be released.