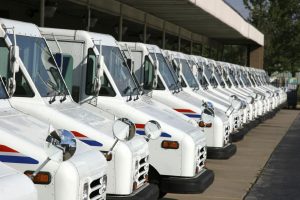 By Andy Medici – April 16, 2015
The Postal Service has narrowed the list of companies competing for a multibillion dollar contract to supply the agency with its next generation of delivery vehicles

The agency released a list of pre-qualified sources for the contract April 14, which include Ford motor company, AM General LLC, Fiat Chrysler Automobiles US LLC and Nissan North America, Inc., among others.

The agency looks to award a replacement contract for its aging fleet to just one supplier. That supplier would provide 180,000 vehicles for $25,000 to $35,000 per vehicle – making the potential contract worth more than $4.5 billion.

The proposed vehicles would need to last at least 20 years, carry a minimum of 1,500 pounds and pass all safety and emissions requirements across the country. The Postal Service would award several companies a contract to test a prototype and then choose the best from among them, according to the Postal Service.

The Postal Service also wants lower maintenance requirements and better fuel economy than its current fleet, as well as design flexibility to allow for the incorporation of future technology, according to the agency.

The agency plans on picking the suppliers for the prototype in July, 2015 and will then test the prototypes through September, 2016. The final supplier will be selected in January, 2017, according to the Postal Service. The Postal Service would start receiving and using the vehicles one year later.

AMP Holding, Inc., said in a press release it wanted to supply the Postal Service with a fleet of electric vehicles that it claims would meet the price requirements the agency has laid out.

“We have always considered ourselves a next generation vehicle manufacturer,” said Steve Burns, AMP CEO. “It is an honor for us to move to the next step in this important Post Office program.”

via Postal Service moves ahead with delivery fleet contract.