With the completion of the 2016 NPMHU National Convention, the National Office and representatives of the U.S. Postal Service have returned to the bargaining table to reach closure on the issues that remain open before an overall settlement can be announced on the terms of the 2016 National Agreement.

As previously reported by National President Hogrogian, at the original midnight deadline on May 20, 2016, the parties agreed to extend their negotiations. There were two primary reasons for that extension: first, the parties had made substantial progress in bargaining, with many tentative agreements already initialed and verbal commitments on approaches to address the outstanding issues; and second, both parties wanted to wait for the release of the final arbitrated award covering the contract between the Postal Service and the American Postal Workers Union, which was expected to be available in June 2016. 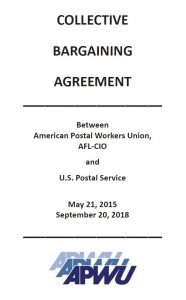 The APWU arbitration award was eventually issued on July 8, 2016, through a panel headed by Stephen Goldberg. The decision awarded a contract covering 40 months, through September 20, 2018. On the key economic issues, the award provides career employees with three general wage increases of 1.2%, 1.3%, and 1.3%, as well as a potential for five cost-of-living adjustments during the same time period. Non-career employees who are not eligible for COLA were awarded wage increases of 2.2%, 2.3%, and 2.3%, plus another 50 cents per hour spread over the contract. The award also included layoff protection for career employees currently on the rolls.

With this award public, talks began to resolve outstanding issues between the NPMHU and the USPS. A short hiatus was taken for the National Convention, but now it appears that a tentative agreement is within reach. Of course, such an agreement will be subject to ratification by the entire membership.

Our agreement will include general wage increases and COLAs for career employees, as well as wage increases and other financial improvements for MHAs. The parties also have reached tentative understandings on important work rules, to provide additional protection to career employees and much-needed improvements for MHAs. Still to be resolved are various MHA-related items, a possible reduction in the percentage of casual employees, and even the total duration of the agreement. But the parties remain optimistic that an overall settlement can be reached soon.

As developments occur, circulation of these Contract Updates will continue, so please check your bulletins for more information.