News Release – Tuesday, October 11, 2016
WASHINGTON – Hundreds of post offices around the country would be protected from indefinite “emergency closure” under new bipartisan legislation from U.S. Senator Claire McCaskill, a longtime champion of rural post service. The bill would prevent the U.S. Postal Service from using its emergency suspension process—meant to be temporary—to indefinitely close post offices without notice to the community, opportunity to appeal, or a timeframe for either reopening or permanently closing the facility.

Since 2011, 650 postal facilities across the country were “temporarily” closed under emergency suspension. Of those closures, 511 remain closed today, and the Postal Service has not told those communities if—or when—those post offices might reopen. McCaskill introduced the legislation with Republican Senator Jerry Moran of Kansas. 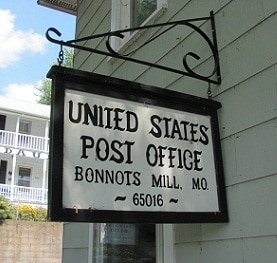 “Missourians in rural communities rely on the Postal Service, and shouldn’t be left in limbo without knowing if the temporary closure of their post office will be a permanent one,” said McCaskill, a former Missouri State Auditor and senior member of the Senate Homeland Security and Governmental Affairs Committee, which has jurisdiction over the Postal Service. “These post offices are part of the lifeblood of our communities—a source of employment and a lifeline for commerce—and we can’t allow the Postal Service to balance its books on the backs of small communities by shuttering post offices where they’re often most needed, with little transparency or explanation.”

“This bipartisan legislation improves the transparency and accountability of the postal services provided throughout the country, but particularly to rural America,” said Anthony D. Leonardi, National President, National Association of Postmasters of the United States. “Many times, Postmasters, workers and communities have been surprised by abrupt and unexpected post office suspensions with little notice and no timetable for their reopening, if they reopen at all. That’s why Senator McCaskill’s  Postal Closure Accountability Act  is critical—it would help end these unexpected closures, and ensure that communities are informed about the status of their community post offices.”

McCaskill, a longtime advocate for postal service in rural communities, is widely credited with having waged a successful campaign over several years to save rural post offices and maintain delivery standards. Earlier this year, she called out the Postal Service for its use of these “emergency suspension” authority to close down Missouri post offices, potentially circumventing the standard process that requires input from communities that would feel the effects of a closure and notifications to Congress.

In January, McCaskill demanded answers from the Postal Service on how it will protect mail delivery for rural Missourians and efficiently manage the cost-sharing benefits with competitors to carry mail the “last mile,” especially in rural areas, saying: “I think it’s really important we get a handle on [rural delivery times]. Those of us who are really pushing to protect rural delivery…think it’s important we know what we’re working with from a data-driven basis.”

And McCaskill is a leading sponsor of the Rural Postal Act, a bill that aims to improve postal service, delivery times, and standards in rural communities that have been disproportionately affected by cuts to the Postal Service. The bill—also backed by Senators Heidi Heitkamp of North Dakota and Jon Tester of Montana—would restore overnight delivery, return a faster First-Class mail standard, make six-day delivery permanent, and enact strict criteria the Postal Service would have to meet before closing a post office to ensure that rural communities are still able to easily access the mail system.