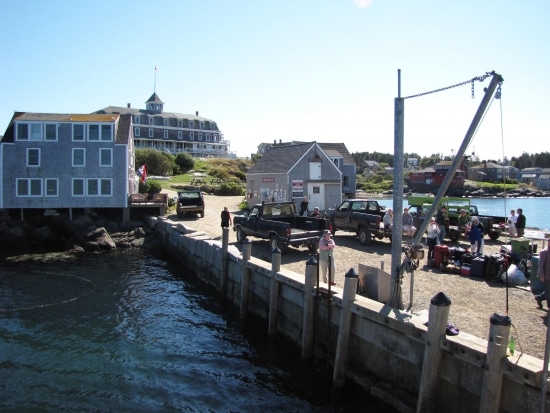 By Laurie Schreiber – January 20, 2015
MONHEGAN PLANTATION — Islanders are concerned about a cutback in hours and pay for the worker who handles retail operations at their island post office. And they’re also concerned the U.S. Postal Service might one day cut its budget for the boat that brings the mail.

The retail position, islanders say, has been a good job that provides a decent, year-round living in a community where job opportunities are limited. Postal officials say the cut in hours for the position comes with the service’s mandate to save money, and that there are no plans to change the arrangement that brings the mail by boat.

There’s a lot at stake, islanders say, because the mail delivery contract provides enough earnings for the Monhegan Boat Line to continue operations through the winter, providing a vital link to the mainland.

Islanders say the delicate balance of an independent community could be threatened by such changes.

During the summer, the boat line is busy with sightseeing and island passengers, as well as freight. But with few passengers during the winter, the line would struggle to operate without revenue from the mail contract.

Islanders also speak of the importance of the postal service for everyday commerce. It’s more than just mail; it’s many things that make island living possible—online orders, business shipments, prescriptions, groceries, building supplies, heating fuel, and clothes are just some of the basics. FedEx and UPS use the post office as their destinations. Every Christmas gift is sent by postal service. 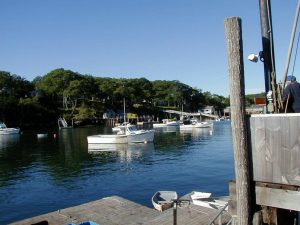 Twelve miles off the mainland, Monhegan’s year-round population averages in the dozens—around 60 people this winter, up from 40-45 a year ago. Seasonal residents boost the population to about 250. Every summer, the island also receives thousands of visitors and artists, arriving by boat from the small mainland town of Port Clyde.

Along with lobstering, the island economy includes hotels and eateries, which rely on tourists. Contractors keep busy repairing the older homes, and artists and craftspeople thrive.

There’s also the grocery store, post office and K-8 school. These institutions are vital to the sustainability of a year-round community on islands, said Jackie Boegel, a long-time resident.

Boegel noted residents demonstrated support for its school when they voted to keep it open no matter how few students were enrolled. And last year, after the closure of its grocery, residents bought property and leased the building for a new grocery. These institutions provide essential services, and jobs at a livable wage. It’s important to ensure the post office can continue to do the same, she said.

“Like all the unbridged islands, we’re small and kind of on the edge of sustainability,” Boegel said. “We’re always aware that all of us on these little islands need these three things to keep a community going in the winter.”

Iannicelli first visited Monhegan 52 years ago with her school roommate.

“I was smitten, and I came to live here when I could,” she said. She’s made her living as a gardener, craftsperson, and artist. Recently, she was in the process of handing over her gardening business to a new resident. “I’m very excited about that, because it will make it possible for her to live here.”

A seemingly small change can have a big impact. The reduced post office position might make it difficult for the employee to make ends meet. If there is a reduction in winter boat service, she said, that could also be a problem.

“It makes it harder for somebody to think of living here year-round,” Iannicelli said. “It’s just one more hurdle in daily life.”

In the winter, the Monhegan Boat Line runs three trips a week to the island. Weekly winter traffic averages one or two passengers, islanders traveling to the mainland, perhaps for a doctor’s appointment or to visit friends. There is often freight.

The delivery contract is renewed every four years. Negotiations with the USPS in 2012 resulted in a small cost-of-living increase.

“It supplements the boat’s ability to run in the winter,” said the line’s Amy Barstow. “We’re the only boat that carries mail to Monhegan, and the only boat line that operates year-round to Monhegan. A lot of other year-round ferry services are subsidized by the Maine Department of Transportation. But we don’t receive DOT subsidies.”

Still, the contract doesn’t completely cover winter operations, which the line supplements with a line of credit, paid back by summer earnings from a full tourist schedule.

USPS communications programs specialist Melissa Lohnes said the change in retail hours, from 40 to 33.5 hours, was part of the agency’s twin mandates to cut costs while keeping rural post offices open. The decision was made after a review process that included a community meeting in August, a customer survey, and an analysis of workload and operational expenses. The decision to reduce hours became effective Oct. 6.

“We’re doing our best to streamline our businesses so we can keep these offices open,” said Lohnes.

Lohnes does not believe the change in retail hours will affect the budget for the mail delivery contract when it comes up for renewal in 2016.

“We’ll still deliver the mail the same way,” she said. “As it stands today, the only planned changes taking place at the Monhegan Post Office will be regarding the modification of the retail hours, not delivery services.”

But the Monhegan Plantation assessors, who are the island’s governing body, think it best to work proactively to identify details that might affect the boat contract, including possible solutions if any problems come up when contract negotiations begin.

Said first assessor Tara Hire, “On an island, you think of the school, grocery and post office as the hubs or symbols of vitality. If one of those goes away, it”s a symbol of the vitality of your home going away.”

via Monhegan postal service is more than mail, islanders say.