The postal service mail truck that caught fire earlier this week on Highway 12 in Wayzata was the latest to light up the night sky following an alarming trend around the country. 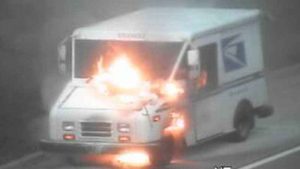 In this case, traffic management cameras captured the flames.

The carrier escaped the truck with injury, but the postal service said three containers of outgoing mail were destroyed.

There have been hundreds of fires in Grumman LLVs, or Long Life Vehicles, around the country over the years. LLVs were designed for the United States Postal Service, the primary user of the trucks.

According to internal documents, the postal service is well aware of the ongoing problems with their aging fleet of mail trucks.

“It’s like a tin can in a camp fire. These things go up quick,” said Tim Benson, who has worked as a mail carrier in Oklahoma for more than 12 years.

Benson started to track mail truck fires after seeing story after story of them bursting into flames.

“This is not the employees’ fault. This is the LLV, the mail truck itself. It’s past its prime. We’ve got a 30-year-old fleet out there.”

After he started tracking them, carriers began sending Benson videos and pictures of their own experiences.

Other online videos show carriers desperately trying to put out the flames and save the mail.

According to internal documents, the postal service acknowledges “an increase in vehicle fires” in recent years.

The document shows that “most fires begin around the engine compartment,” and some are due to failed fuel system components.

Employees have been warned to look for leaks.

“The fleet is not going to make it,” Benson said.

The postal service would not say how many trucks have caught on fire.

However, a postal worker on the east coast shared an image on an industry website – it shows a bulletin board post for employees urging workers to avoid fire hazards because there were 88 mail truck fires during fiscal year 2017.

The postal service would not independently confirm the number.

“I just ask that it get pout out to all these employees so they know how bad the problem is and how many of these are going up in flames,” Benson said.

A spokesperson for the postal service told 5 EYEWITNESS NEWS that the mail trucks are “near the end of their useful life.”

The USPS is currently testing prototypes that will incorporate new technology.