03/20/2017 – On March 16, the House Oversight and Government Reform Committee “marked-up” and approved the Postal Reform Act of 2017 (H.R. 756). A mark-up is a formal process where a congressional committee can consider and amend a bill before advancing it to the full House of Representatives or Senate. Recognizing the need to set the Postal Service on sound financial footing, the APWU supported H.R. 756 advancing through committee. The favorable vote to move the bill out of the Oversight Committee is one of several key steps in a lengthy legislative process.

Recognizing the need to set the Postal Service on sound financial footing, the APWU supported H.R. 756 advancing through committee. The favorable vote to move the bill out of the Oversight Committee is one of several key steps in a lengthy legislative process.

Since the passage of the 2006 Postal Accountability and Enhancement Act (PAEA), the Postal Service has been dragged down by the weight of the pre-funding mandate and has struggled financially to keep its head above water. “This bill takes us to higher ground,” stated Rep. Cummings, as the key components of H.R.756 ensure the long and short-term financial viability of the Postal Service.

As previously reported, the bill largely solves the disastrous pre-funding mandate while at the same time treating our retirees fairly. The bill would also allow the Postal Service to modestly raise postage rates immediately, generating roughly an additional one-billion dollars in annual revenue.

Several revisions to the bill were considered in last Thursday’s mark-up, addressing some of APWU’s concerns.

After H.R. 756 was introduced in January, President Dimondstein and APWU’s Legislative Department requested clarifying language to ensure that prescription drug benefit coverage under FEHB would not decrease through Medicare integration. A manager’s amendment (a change to the bill by its sponsor) was offered by Chairman Jason Chaffetz to address this concern. The manager’s amendment was adopted by the Committee.

Another concern the APWU voiced with lawmakers is the unintended consequence of certain postal annuitants who could not benefit from Medicare Part B. On this issue, Chairman Chaffetz and Rep. Lynch engaged in an exchange to clarify the bill’s intent. They recognized APWU’s concern and stated unequivocally that this is not the bill’s intent. They committed to further investigate and consider any necessary revisions going forward to address this. A bill is always a work in progress until signed by the U.S. President.

The Committee also adopted an amendment by Rep. Mark DeSaulnier (D-CA) requiring the Postal Service to give members of Congress advanced notice if a postal facility in their district would be subject to closure, consolidation or a reduction in service. As we have seen in past efforts to shutter post offices and mail processing facilities, members of Congress can be key allies in rallying community support in the fight against such counterproductive cuts. Any move to get lawmakers more engaged in the discussion sooner, as this amendment would, is a positive development.

There are key legislative steps still before H.R. 756, including consideration before the full House of Representatives, the Senate Homeland Security and Governmental Affairs Committee and the full Senate.

Rep. Lynch, an original co-sponsor of the bill, contrasted H.R. 756 to negative postal reform bills of the past, “I’ve seen the steady menu of bills that varied from the mean-spirited to the draconian, that never saw the chance of getting to the floor.” He further expressed his hope that this bipartisan compromise effort would move through the House.

The APWU supports H.R. 756 advancing through the legislative process and will continue to provide updates and work with lawmakers and allies to ensure a robust future for America’s public Postal Service. 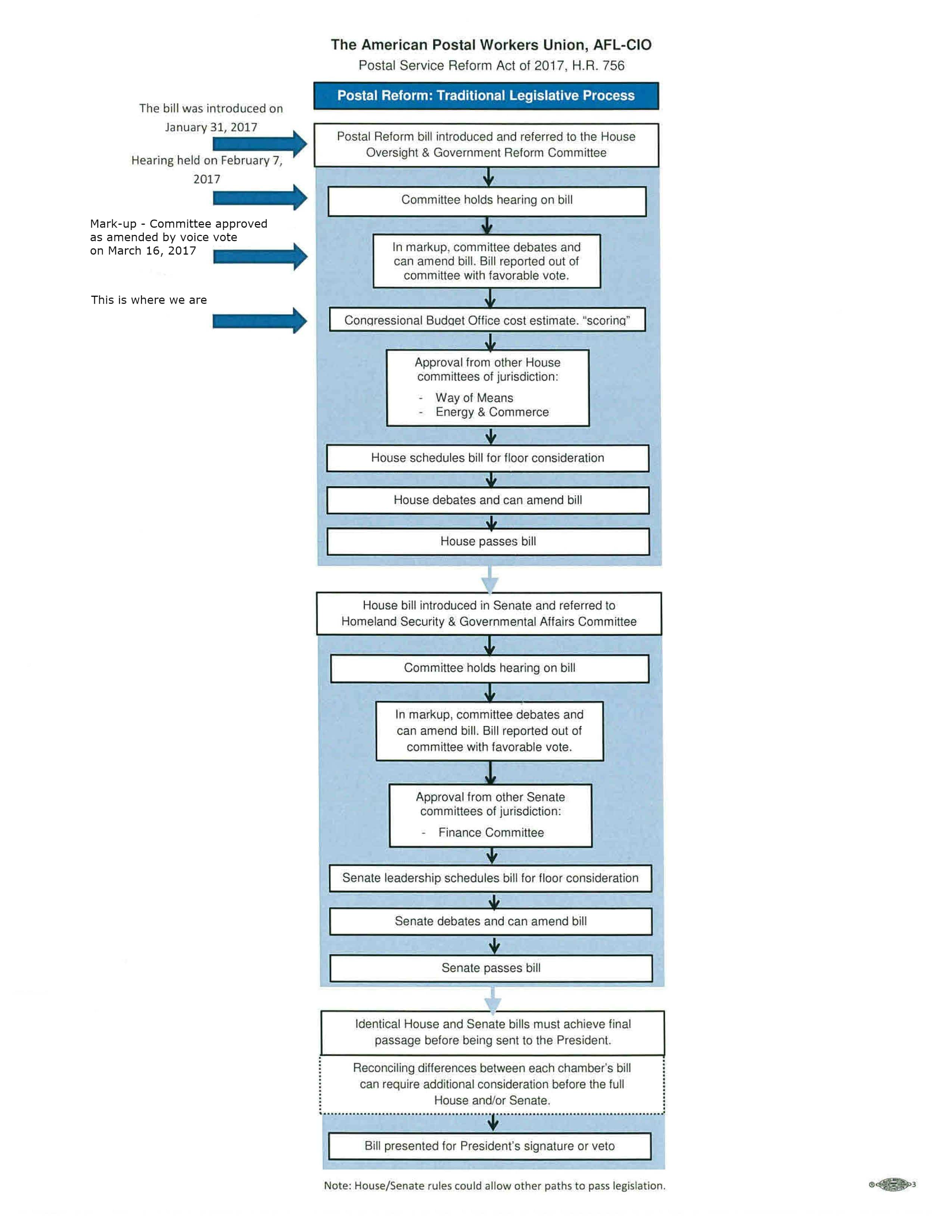 The Postal Service Financial Improvement Act of 2017 (H.R. 760), introduced by Rep. Stephen Lynch (D-MA) and Rep. David McKinley (R-WV), was marked up and sent out of committee on March 16th as well.

The bill is intended to be companion legislation to H.R. 756. If passed, it would require the Department of Treasury to invest between 25-30% of the Postal Service Retiree Health Benefit Fund (PSRHBF).

Under current law, the PSRHBF is only invested in Treasury Bonds with very low-yielding returns. Medical inflation rises much faster than Treasury Bonds which results in projected unfunded liabilities. If the PSRHBF could be invested in higher yielding funds, like those used for the Thrift Savings Plan, it would produce returns that would help keep up with medical inflation at a much faster pace. This frees up postal funds that could be directed to improve service and strengthen infrastructure.