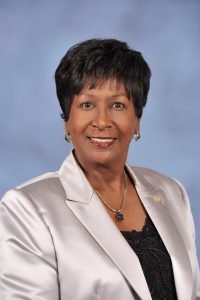 04/11/2016 – APWU President Mark Dimondstein has appointed Judy Beard to serve as Legislative and Political director, effective April 16. She will fill the vacancy created when John Marcotte becomes Health Plan director following the retirement of William Kaczor. In accordance with APWU Constitution, the National Executive Board approved the appointments.

Beard was elected Retirees Department director in November 2007, and will be the first female legislative director in the union’s history.

“As Retiree Department Director, Sister Beard has fought to protect Medicare, Social Security and the federal retirement programs, and to preserve the public Postal Service and – among other things. She has developed a keen understanding of legislative issues and the legislative process,” Dimondstein said. “Her experience in these areas will be an asset in her new position. She is a proven, effective, leader and she is excited to take on the new responsibilities.”

Beard said, “I have been honored to represent our retired members in the halls of Congress and I am excited about taking on the challenges of this new position. I look forward to continuing to fight the APWU’s legislative battles – to preserve America’s public Postal Service, to win a living wage for workers, to protect Social Security, Medicare and cost-of-living adjustments, along with many other crucial struggles.”

Beard got her postal start in 1970 in Detroit and held many union offices in the Detroit District Area Local – and taught for year at the University of Michigan’s School of Industrial Relations – before coming to Washington, DC.