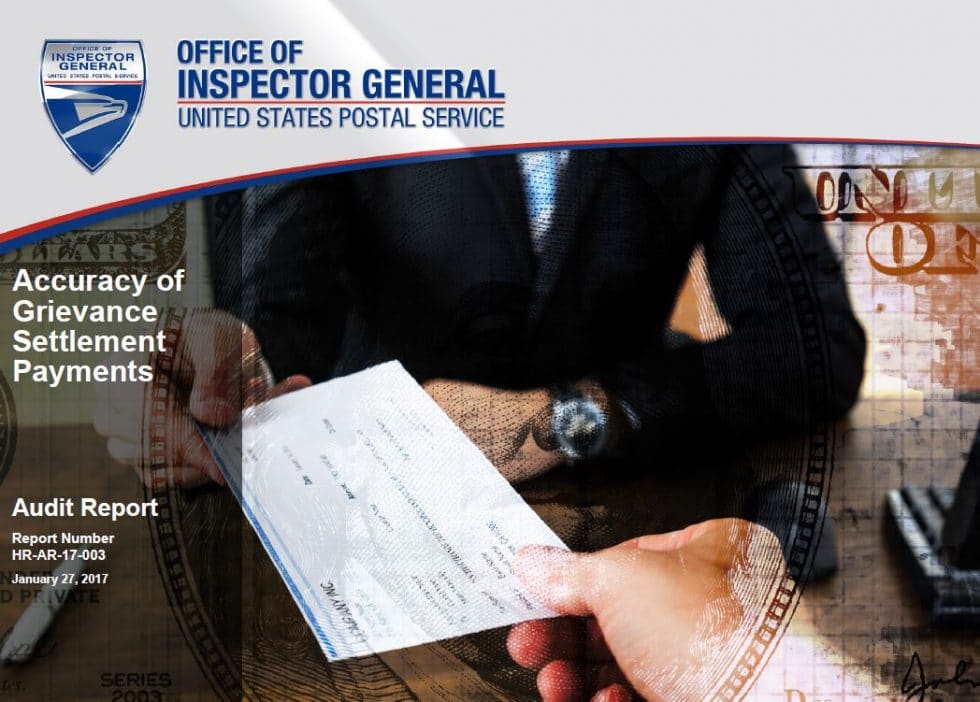 Background
Under its national agreement with the American Postal Workers Union (APWU), the U.S. Postal Service must make every effort to promptly pay monetary grievance settlements and arbitration awards.

On December 5, 2014, the Postal Service and the APWU reached a $56 million settlement on the Global Remedy dispute, a long-standing grievance regarding postmasters and supervisors performing bargaining unit work designated for clerk craft employees.

Separately, on November 12, 2014, the Postal Service and the APWU reached a $4.8 million settlement regarding the Kelly Services, Inc. dispute, resolving payments to employees who were excluded from a previous settlement regarding the Postal Service hiring over 200 temporary employees between 1996 and 1999. The original $19 million Kelly Services settlement, reached on March 26, 2007, gave a lump sum payment to individuals who were postal clerks at the time of the settlement.

Our objective was to assess the accuracy of payments related to the APWU Global Remedy and Kelly Services settlements.

What the OIG Found
The Postal Service did not accurately process and disburse about $13.2 million in initial payments for the Global Remedy ($11.5 million) and Kelly Services ($1.7 million) APWU grievance settlements during January 2016 and December 2015, respectively.

The payment errors included non-payments, underpayments, overpayments, and payments to employees not entitled. Since April 2016, the Labor Relations Systems and Payroll groups have been collaborating to correct the errors; however, as of December 2016, all errors have not been resolved.

Due to inadequate internal controls, the Postal Service underpaid employees by $3,043 and overpaid by more than $3.4 million. In addition, management erroneously paid $75,129 to eight employees who were not on the APWU’s list of employees entitled to payment.

What the OIG Recommended
We recommended management finalize resolution of outstanding underpayments and collect outstanding overpayments in both settlements, enhance procedural guidance to be more comprehensive, and implement a reconciliation process.