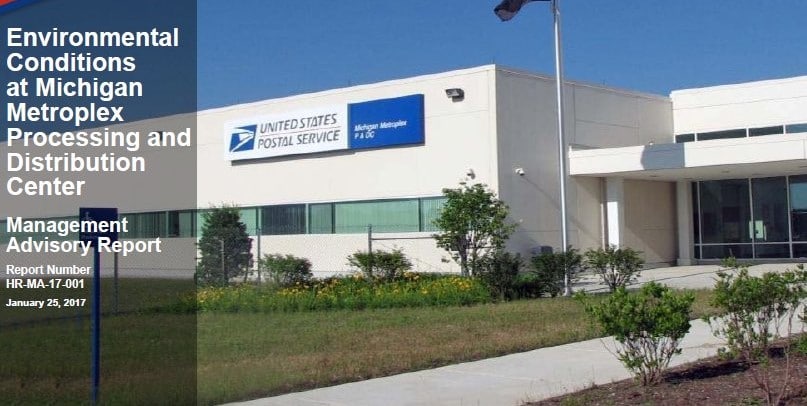 Background
This report presents the results of our follow-up to the management alert issued February 22, 2016, regarding the malfunction of the methane detection system observed at the U.S. Postal Service Michigan Metroplex (Metroplex) Processing and Distribution Center in Pontiac, MI.

The Metroplex is built on privately owned property that formerly contained a foundry, manufacturing operations, and hazardous materials storage and handling areas, which left residual contamination in the soil and groundwater at the site. The landowner tested the land (i.e., surface soils, subsurface soils, and groundwater) to determine the location and nature of the contaminants, and initiated clean-up in preparation for building the facility. It is the landowner’s responsibility to annually test the groundwater on the property.

Studies commissioned by the landowner found decomposition of organic materials underground created methane. When the Postal Service built the Metroplex in 2008, it installed a series of collection and ventilation pipes, known as a passive ventilation system, to prevent methane from infiltrating the building and sensors to detect methane and alert personnel of any seepage and accumulation of methane gas inside the facility.

The American Postal Workers Union and a Postal Service contractor first raised concerns about the safety of the facility in August and December 2015, respectively. Postal Service management contracted with three independent contractors and requested the U.S. Department of Labor Occupational Safety and Health Administration to test for methane and assess the methane venting and detection systems and their effectiveness.

After we issued our management alert, we contracted and worked with an environmental and technical services company to assess the methane venting and detection systems, environmental concerns and corrective actions management took to address our recommendations.

Our objective was to evaluate the environmental conditions at the Metroplex and the Postal Service’s corrective actions.

Management installed stand-alone secondary equipment to test for methane and took corrective actions to adjust sensors on the methane detection system that did not correctly detect known levels of methane by reprogramming, recalibrating, and properly mounting the sensors. Also, to improve performance and monitoring of the methane detection system, management installed a more detailed display panel, new wiring in select locations, and a computer to log historical readings from the sensors.

Following completion of our fieldwork (October 2016), the Postal Service commissioned an additional evaluation of the existing methane mitigation system relative to environmental requirements, system data collected from the time installed until the present, and changes in technology since installation.

The results of the additional testing (November 2016) disclosed methane levels of the building subslab sampled from two vent pipe locations (D1 and D2) exceeded the concentrations considered when the building was designed.

In subsequent discussions, Postal Service officials stated they would initiate modifications to the current methane detection system by making the subslab venting “active” on vent stacks D1 and D2, which are located in the quadrants of the building over the existing underground contamination. Management stated that vent stacks D3 and D4 will not be made active as there have been no readings indicating it is warranted in those areas. Their consultant’s November 2016 report indicated additional sampling of subslab vapors analyzed for speciated volatile organic compounds (VOC) did not identify benzene or other VOCs that exceeded the current screening levels.

An active system should include fans or vacuum blowers within the vertical pipes to remove potentially contaminated air through the pipes to vents above the exterior roof line of the building. This should mitigate the risks of vapor intrusion of methane and VOCs due to collection pipe spacing and increased pressure differentials. An active system also eliminates the need to look for potential cracks, openings, and pathways that could be sources of vapor intrusion in the event the pressure differential exceeds a set threshold.

While noting these corrective actions listed above, we identified the following issues:

Periodic maintenance, adequate training, and an updated operating manual would allow officials to verify the methane venting and detection systems are operating as designed and prepare them to identify and resolve potential issues. These actions could also enhance employee confidence in the Postal Service, increase productivity, and boost morale.

What the OIG Recommended
We recommended management finalize conversion of the methane venting system from passive to active, develop a process to check the sensor calibration, provide training on the methane detection system to responsible personnel, and update the operating manual.