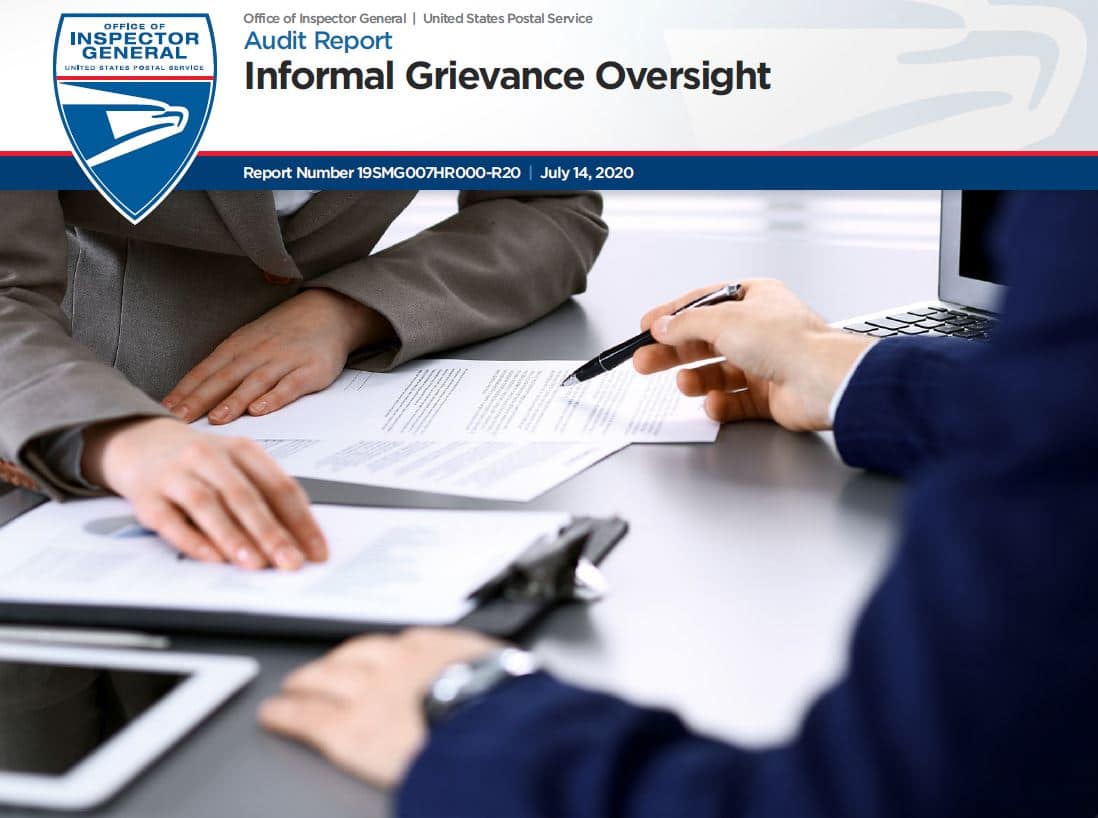 The Postal Service defines a grievance as a dispute, difference, or disagreement between parties or a complaint lodged by a party regarding wages, hours, or conditions of employment. The informal grievance process allows employees to discuss and settle grievances with their immediate supervisor; however, if there is no resolution, the employee or union can file a formal grievance.

Article 30 of the national agreements enables both parties at the local level to enter into a local implementation process to review and negotiate over certain work rules and other terms and conditions of employment. It also provides that a current local memorandum of understanding (MOU) between the Postal Service and its unions remains in effect during the term of a new national agreement unless the parties change it through subsequent local implementation or related impasse procedures.

Supervisors receive a number of training courses on grievance handling that include, but are not limited to labor relations for operations, GATS requirements, and overtime administration. Additionally, supervisors have the authority to settle and make informal grievance payments to an employee at any time. Some districts have implemented a monetary threshold that requires a higher-level manager review of grievance payments that exceed a certain amount prior to payment. Since Postal Service policy does not require monetary thresholds, not all districts have this additional control.

The Postal Service’s oversight of informal grievances is not effective. Informal grievance costs and number of payments have continued to trend upward from fiscal years (FY) 2013 through 2018. Specifically:

In addition, management did not maintain a central repository or database of contractual documentation, such as local MOUs and related settlement agreements and could not always identify total grievance payments associated with each of these contractual obligations obtained from the sites we reviewed. This hindered management’s ability to effectively track and monitor financial obligations, negotiate and make changes to prospective agreements, and identify potential issues and/or training needs.

Finally, in many instances, GATS issue codes were outdated, inaccurate, or non-descriptive in GATS and the GATS Entries Handbook. There were 1,721 issue codes used in GATS, between FYs 2013 and 2018 and 2,104 codes in the January 2000 GATS Handbook.

These conditions occurred because:

Reducing informal grievance costs and payments and increasing the accountability for grievance oversight are critical to ensuring that settlements are valid and equitable; reducing the Postal Service’s risk of additional grievances being filed and improper payments being administered without detection; and reducing costs to process settlement payments. These factors may also affect employee morale, vacancy, and turnover rates.