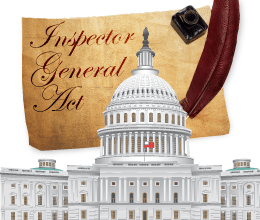 King Louis XIV of France did more than usher in a golden age of art and literature and preside over a dazzling royal court at Versailles in the 17th century. He also introduced the world to the inspector general concept, appointing agents to review his military and report back what they found.

Other European countries followed suit and kept the practice alive, and in the 1770s, George Washington adopted it in the New World. The inspector general concept, refined over the years, has been a part of our country’s make-up ever since. Congress formally structured the inspector general concept in the 1970s, and President Jimmy Carter signed into law the Inspector General (IG) Act of 1978.

There are now 73 inspectors general with the mission of detecting and preventing fraud and misconduct in their agency’s program, as well as examining the efficiency and effectiveness of agency operations. They do this by conducting independent audits, investigations, and inspections.

The IG Act has been modified many times to give IGs better tools to carry out their mission. Now, inspectors general have even more tools in the toolbox with the December enactment of the IG Empowerment Act of 2016, H.R. 6450.

Other provisions include new reports or information that IGs will have to produce, including additional facts and figures in the required Semiannual Report to Congress, and specific deadlines for posting reports on websites. The new law is also expected to increase government transparency and boost the public’s confidence in the independence of IGs.

If you are interested in learning more about the Inspector General community, please visit https://www.ignet.gov/

One thought on “USPS OIG Blog: Adding to the IG Arsenal”