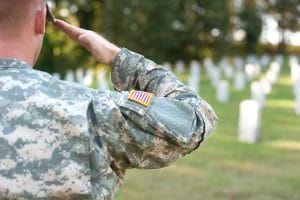 Memorial Day honors members of the armed forces who died while serving the nation.

Memorial Day, a federal holiday to honor U.S. military members who died while serving their country, will be observed Monday, May 28.

“The men and women of the armed forces place America’s safety before their own,” said Postmaster General Megan J. Brennan. “Memorial Day is a time to remember their valor, courage and the sacrifices they have made on our behalf.”

Memorial Day holds special significance for USPS, one of the nation’s largest civilian employers of military veterans. More than 100,000 employees have served on active duty or currently serve in the National Guard or Reserve components.

First widely celebrated each year on May 30, Memorial Day originally honored veterans who had died in the Civil War.

Congress designated the commemoration as a national holiday in 1887. After World War I, the day was expanded to honor service members who died in all American wars.

In 1968, Congress changed the observance of the holiday from May 30 to the last Monday in May.

The U.S. Department of Veterans Affairs site has a detailed history of Memorial Day.