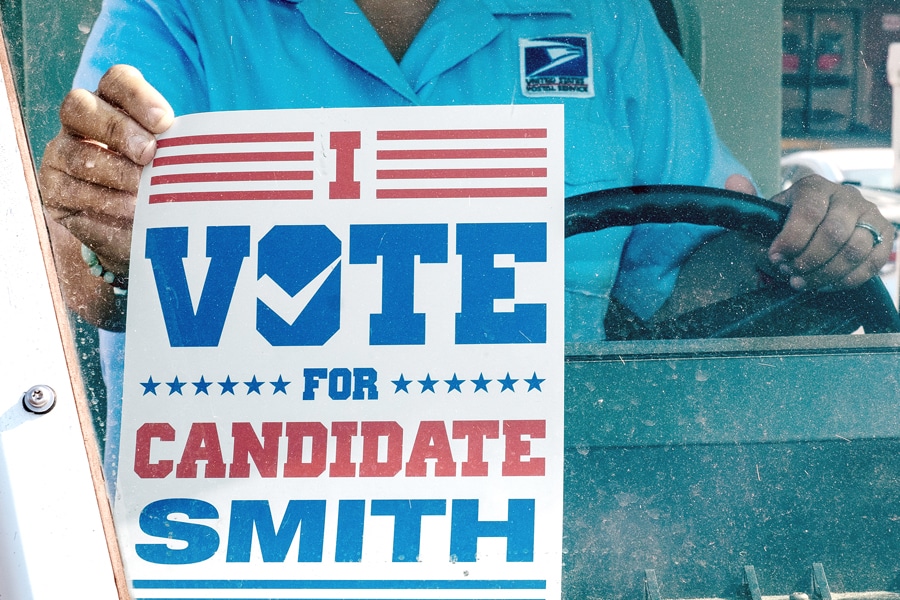 A USPS letter carrier simulates displaying a political candidate’s sign on a delivery vehicle. Placing a political sign in a Postal Service vehicle is considered partisan political activity and a violation of the Hatch Act.

Postal Service employees are continuing to learn about the Hatch Act.

The long-standing law prohibits postal and other federal employees from engaging in political activity while on duty, while wearing a uniform, while on federal property or while inside a federal vehicle.

In a new message, USPS is highlighting the real-life case of “Sandy” — not her real name — a letter carrier who placed a political candidate’s sign in the window of her Postal Service vehicle.

While Sandy is free to put a campaign sign in her front yard or a normal-sized bumper sticker on her personal vehicle, placing the sign in her LLV is considered partisan political activity and violated the Hatch Act.

It was also misuse of government property and a safety violation.

The Postal Service disciplines employees like Sandy for misusing government property and not upholding safety regulations. Additionally, USPS refers conduct like hers to the Office of Special Counsel for investigation of Hatch Act violations.

Sandy’s example is being shared through messages in employee news publications and on Postal Vision video monitors.

USPS previously told employees about “Daniesha,” a letter carrier who wrote “corrections” on political mail pieces before putting them in the mailboxes of her customers; “Michaela,” a retail associate who made political posts to social media while on the clock; and “George,” a letter carrier who broadcast a political endorsement on social media while on duty and sitting in his postal vehicle.

The Postal Service will share more examples throughout the year.