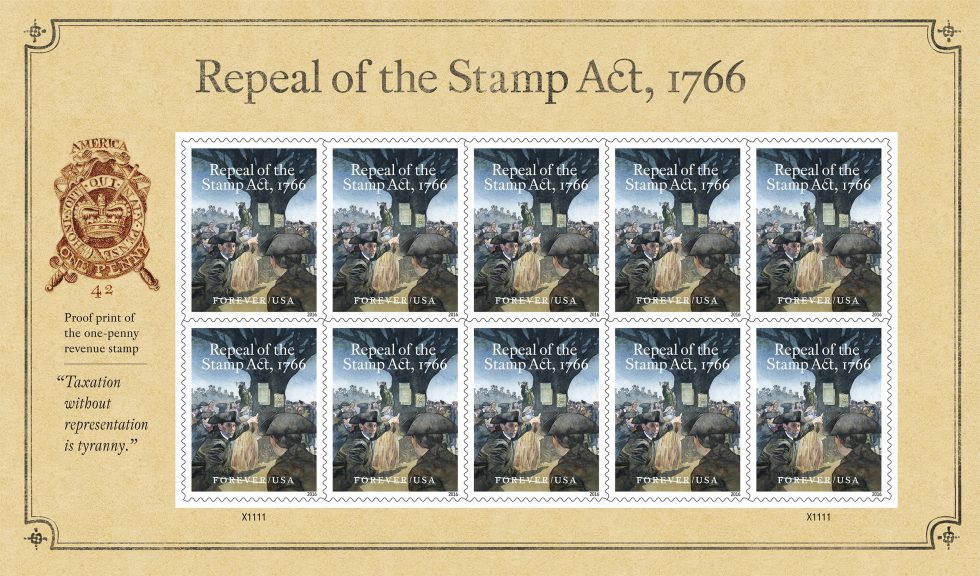 May 29, 2016
NEW YORK — The U.S. Postal Service today dedicated a Forever stamp souvenir sheet commemorating the 250th anniversary of the repeal of the Stamp Act in 1766. The Stamp Act was British legislation that proved historic in galvanizing and uniting the American colonies, setting them on a path toward independence.

The stamp ceremony was held at the World Stamp Show — NY 2016 at the Jacob K. Javits Center in New York City, which continues through June 4. The United States plays host to a sanctioned international stamp show only once every 10 years. 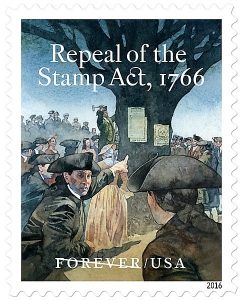 “To me, the stamp represents what’s great about America and Americans,” said U.S. Postal Service Chief Ethics and Compliance Officer Mike Elston.  “Whether born here or only just recently arrived, we share in common a passionate love of liberty and freedom, and the willingness to sacrifice whatever it takes — even ‘our lives, our fortunes and our sacred honor’ — to defend our liberties and our freedom,’” he said, referring to the last line in the Declaration of Independence.”

The Stamp Act, enacted in 1765, required payment of a tax on a wide array of paper materials, such as newspapers, pamphlets, legal documents, licenses, mortgages, contracts and bills of sale. A stamp would be embossed on these papers to indicate payment.

The commemorative stamp art depicts a crowd gathered around a “liberty tree” to celebrate the repeal of the Stamp Act. “Liberty trees” could be found in a number of cities throughout the colonies, and were popular gathering spots for community meetings, political discussions, celebrations and more.

The selvage area on the left side of the souvenir sheet displays a proof print of a one-penny revenue stamp, and includes a famous slogan from the era: “Taxation without representation is tyranny.” Verso text appears on the back of the pane. The stamp was illustrated by noted historical painter Greg Harlin of Annapolis, MD. Art director Antonio Alcalá designed the stamp and the pane.