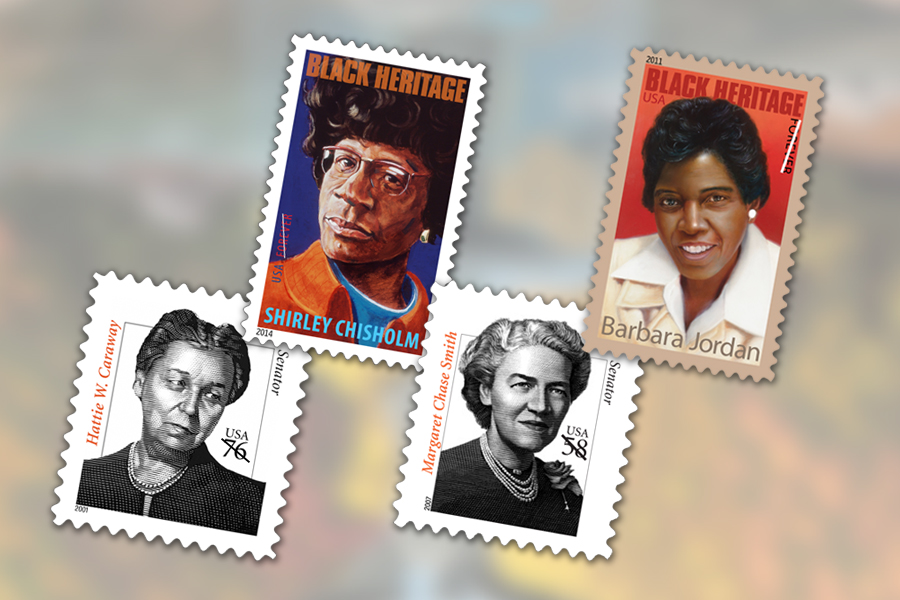 The 116th U.S. Congress, which convenes this week, is expected to have 131 women members — a record. Here’s a look at the four female members of Congress who have appeared on stamps.

1. Sen. Hattie Caraway. Caraway, a Democrat, was appointed to represent Arkansas in the Senate after the death of her husband, Sen. Thaddeus Caraway, in 1931. She was elected in her own right in 1932 to fill the remainder of her husband’s term. She was re-elected two more times, serving until January 1945. The 76-cent Caraway stamp, issued in 2001, was part of the Postal Service’s Distinguished Americans series.

2. Sen. Margaret Chase Smith. Smith was the first woman to serve in both houses of Congress, having served in the House from 1940-1949 and then as a senator from Maine from 1949-1973. When the Republican left the Senate, she held the record for longest-serving female senator, which held until 2011, when she was surpassed by Sen. Barbara Mikulski, a Maryland Democrat. The 58-cent Smith stamp, issued in 2007, also was part of the Distinguished Americans series.

3. Rep. Barbara Jordan. Jordan, a Democrat, represented Texas in the House from 1973 to 1979. She is perhaps most well-known for a speech she gave in 1974 in which she defended the U.S. Constitution during the House Judiciary Committee’s hearings on impeachment articles for President Richard Nixon. Issued in 2011, the Jordan Forever stamp was part of the Black Heritage series.