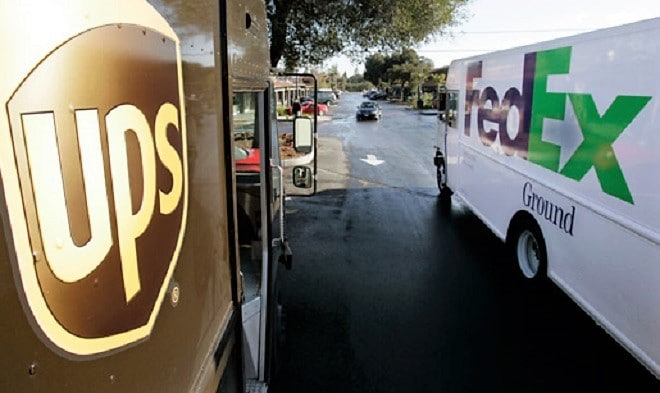 By Mark B. Solomon – April 28, 2017
UPS Inc. and FedEx Corp. are offering a new type of pricing for deliveries within a 50-mile radius, according to a person familiar with the companies’ strategy, in a move designed to divert local “last mile” business-to-consumer traffic normally moving with the U.S. Postal Service (USPS).

Short-haul shipments delivered by the two giants would fall under a new “zone 1” rating, according to the person. UPS and FedEx would price those deliveries cheaply, largely because they wouldn’t involve the use of over-the-road, line-haul services that add to the carriers’ costs. The pricing has been made available to a select group of large customers that have requested it, according to the person.

The United States is divided into eight geographic parcel zones. Zone 8 represents the longest lengths of haul, and generally the most expensive pricing. UPS and FedEx offer “zone 2” rates, but those apply to deliveries made over longer distances that require a line-haul component.

Historically, Atlanta-based UPS and Memphis-based FedEx have either turned away requests for local origin-destination deliveries, slapped on a surcharge, or imposed higher zone 2 rates. That’s because their elaborate package-sortation networks are not structured to support the inbound tenders of large volumes at their facilities.

Instead, shippers rely on USPS, or local courier services, to handle intra-city shipments.

However, UPS and FedEx are re-configuring their networks to efficiently accommodate much more e-commerce throughput, and the person said that would include the types of moves qualifying for zone 1 pricing. FedEx Ground, the ground parcel unit that handles most FedEx e-commerce deliveries, has added four major U.S. hubs and 19 automated stations in the past year alone, a 10 million-square-foot expansion. UPS is spending hundreds of millions of dollars to automate its “Tier 1” U.S. hubs that today handle a little more than half its domestic volume. The modernization should improve network productivity by up to 25 percent when the work is done sometime in 2019, Rob Martinez, president and CEO of Shipware LLC, said last month.

Until recent years, very short-haul deliveries accounted for a small fraction of the carriers’ traffic mix. But the growth of e-commerce, and increasing customer demands for faster delivery times, have placed greater emphasis on the need for robust local delivery networks. The phenomenon is being felt in the distribution center segment, with the latest trend of developing taller DCs being driven in part by the lack of space in densely populated urban centers to locate a wide fulfillment facility.

To provide local deliveries of packages moving through their networks, FedEx and UPS use a post office product known as “Parcel Select,” where companies induct packages deep into the postal system, after which USPS’ cadre of letter carriers make deliveries to residences. The product has been extremely popular with USPS’ customers.

However, soaring e-commerce volumes have given FedEx and UPS the confidence they can build the package density necessary to cost-effectively handle local shipments themselves rather than turn them over to USPS and share part of the revenue.

In a government filing in February, USPS warned that efforts by UPS, FedEx, and Seattle-based Amazon.com Inc., the biggest user of Parcel Select, to expand their shipping capabilities and divert business from USPS could jeopardize the annual double-digit growth of Parcel Select, which has become a key component of its current and future prospects.