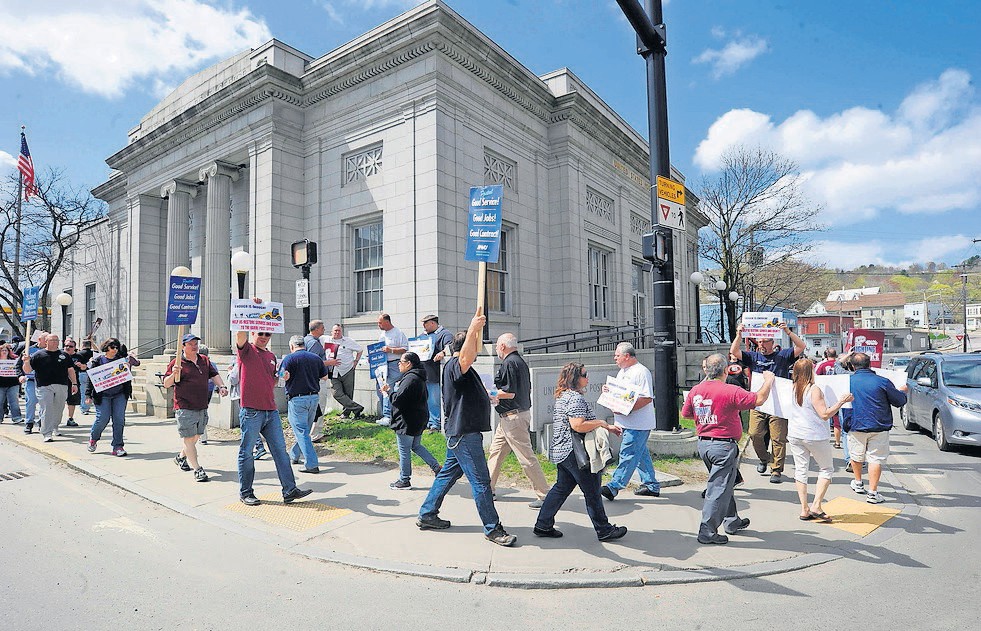 Dozens of unionized postal workers from across the region picket outside the Barre post office Friday morning to support their local colleagues. JEB WALLACE-BRODEUR / STAFF PHOTO

By Stephen Mills – April 29, 2017
BARRE— Postal workers from across New England picketed in the Granite City on Friday, protesting working conditions at the Barre Post Office.

Union officials representing workers said they were protesting on behalf of their Barre colleagues who had complained about harassment and staffing problems under Postmaster Lori Brochu.

About 50 postal workers from the New England region marched outside the South Main Street post office, carrying signs and chanting slogans for about an hour between 11 a.m. and noon.

Many of the protesters at the rally were in the area because they are attending a postal worker union conference in Killington this weekend, union officials said.

“This is a post office where we’ve had problems for the past year and a half, two years,” Dirzius said. “We have an issue of dignity and respect where they don’t respect the workers. …We have grievances that get settled but are never implemented. We have service issues — long lines going out the door because the right staffing isn’t on the windows. While we don’t represent letter carriers — they’re a different union — they’re also out till 7, 8, 9 o’clock at night because the staffing isn’t right.”

Employees who work the windows get yelled at and criticized by the manager in front of customers, he said, and they’ve been trying to resolve the problem through other means for a year and a half.

Dirzius said issues raised with management at both the district and regional levels “fell on deaf ears” and have been ignored, with blame placed on the local union president and the workers. So they decided to bring the issue to customers.

Responding to the rally on behalf of the U.S. Postal Service was Boston-based communications program specialist Steve Doherty.

He confirmed that picketers were protesting about staffing and working conditions at the Barre Post Office.

“We’ve had complaints of this type going back since 2005,” Doherty said. “In that time we’ve had 10 postmasters or officers in charge (in Barre), so you can look at that and say we’ve put 10 monsters in a row in charge of the place, or the problem lies elsewhere.”