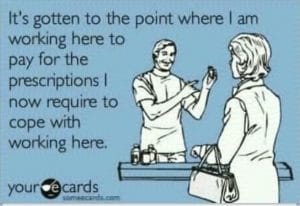 By many accounts, America’s workers are both overworked and overwhelmed: Work days bleed into personal time, and some complain about the inability to control, or even plan for their constantly changing schedules. So it’s no surprise that such circumstances can lead to high stress levels, but the reality of career-related stress might be more costly than most workers realize.

A 2015 working paper from Harvard and Stanford Business Schools takes a look at 10 common job stressors: from lack of health insurance, to long working hours, to job insecurity. Researchers then considered how the mental and physical effects of these forms of stress related to mortality. The paper found that health problems stemming from job stress, like hypertension, cardiovascular disease, and decreased mental health, can lead to fatal conditions that wind up killing about 120,000 people each year—making work-related stressors and the maladies they cause, more deadly than diabetes, Alzheimer’s, or influenza.

High levels of stress are costly in monetary terms, too. Researchers found that stress-related health problems could be responsible for between 5 to 8 percent of annual healthcare costs in the U.S. That amounts to about $180 billion each year in healthcare expenses.

The study found that some stressors proved more problematic than others. Lack of health insurance, for instance, has a particularly grim effect on health. It results in financial stress, causing delayed treatment for potentially serious medical issues—which can certainly contribute to mortality.

But other, seemingly more innocuous stressors can prove problematic too. “Decisions about work hours and shift work have profound health consequences, possibly through their effects on work stress, sleep, and the conflict between work and other roles,” according to the researchers. The paper cites several problematic conditions that can arise from an unusual or erratic schedule: Those who worked long hours self-reported more cases of hypertension, for instance. There have also been correlations between occupational injuries and working longer hours during the preceding week. In fact, a 2005 study noted that those who reported high levels of feeling overworked were 20 percent more likely to say that they had made lots of mistakes on the job, which could be especially problematic for those with physically demanding or dangerous positions. Shift work and long work hours were also associated with worse health generally, and bad health decisions—like smoking.

Work stressors can be hazardous to health in other ways, too. For instance, employees at downsizing firms have been found to get sick at a rate more than two-times as high as workers who feel secure in their jobs. The stress that comes from the combination of low job control and high demands has also been found to contribute to issues like cardiovascular disease. Conflicting priorities between work and home have a negative affect on mental health, and have been linked to some substance-abuse issues, according to the study.

How employees feel about their company’s operation turns out to also be important to health. Those who think that their workplace deals with employees unfairly are more prone to reporting poor health. That means, to some extent, that managers and executives may be able to help mitigate stress-related health issues, and that top-down efforts to foster a more collegial and secure working environment may lead to happier and healthier workers. The researchers recommend company-wide events, and mentorship programs to help in tackling high stress levels for employees and the associated health costs for employers. Efforts to retain employees for significant periods of time might help too, since workers tend to feel more secure and form more supportive social networks when there is some level of consistency within the employee pool, according to the research.

“We do not claim that an ideal stress-free workplace is realistically or economically achievable,” write co-authors Joel Goh, Jeffrey Pfeffer, and Stefano  A. Zenios. Instead they suggest that a focus on stressors that can reasonably be targeted and reduced might have a beneficial impact for everyone. “Even though it is likely that these stressors cannot be completely eradicated in practice, our analysis suggests that even reducing their prevalence could potentially go a long way in improving health outcomes and cost.”