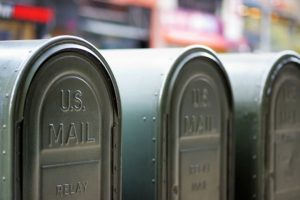 By Eric Katz – March 18, 2016
They don’t call it snail mail for nothing, it would appear.
The U.S. Postal Service could be missing out on critical revenue during the election season as it continues to deliver mail more slowly, according to a new report.

The postal inspector general published a management advisory this week that found customers who typically send out large batches of political mailings have expressed concerns about “mail delays and service quality.” The Postal Service brought in $525 million in revenue during the 2012 election cycle, and postal officials had estimated that number will nearly double to $1 billion in 2016.

USPS has established a “comprehensive 2016 political mail strategy,” according to the IG. Among other things, the Postal Service is allocating staff to handle such business directly. The agency started planning for the election cycle earlier than in previous years and has developed relationships with key players in the industry. Postal officials have spoken at and sponsored political mailers’ conferences and created special tools for its sales team to target its efforts to meet specific needs across the country.

In meeting with political mailers, however, the IG found some businesses described the Postal Service’s recent performance as “abysmal.” A whopping 75 percent of the mail service providers with whom the auditors spoke voiced concerns over the agency’s operations. A USPS official conceded to the IG that concerns over missed delivery standards “have led many mailers to shift from mail to other forms of advertising.”