Press Release – January 25, 2017
WASHINGTON — The U.S. Equal Employment Opportunity Commission (EEOC) today announced that President Trump has named Commissioner Victoria A. Lipnic Acting Chair of EEOC. Lipnic has served as an EEOC Commissioner since 2010, having been nominated to serve by President Barack Obama, and confirmed by the Senate, initially for a term ending on July 1, 2015. President Obama nominated her to serve a second term ending on July 1, 2020, and she was confirmed by the Senate on November 19, 2015. 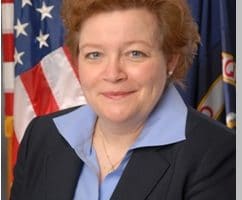 “I am honored and humbled to be chosen by President Trump to serve as Acting Chair of EEOC, the agency which safeguards the civil rights of American workers,” Acting Chair Lipnic said. “I believe equal employment opportunity is critical to all Americans and to how we define ourselves as a nation. I look forward to working with the President, my colleagues at EEOC, Congress, and, of course, the American people in this critical task.”

Before joining the Department of Labor, she was the Workforce Policy Counsel to the Majority (Republican) members of the Committee on Education and the Workforce in the U.S. House of Representatives and was an attorney for labor and employment matters for the U.S. Postal Service. Lipnic also worked as special assistant for business liaison to then-Secretary of Commerce, Malcolm Baldrige.

Lipnic received her B.A. degree in Political Science and History from Allegheny College and her J.D. from George Mason University School of Law.