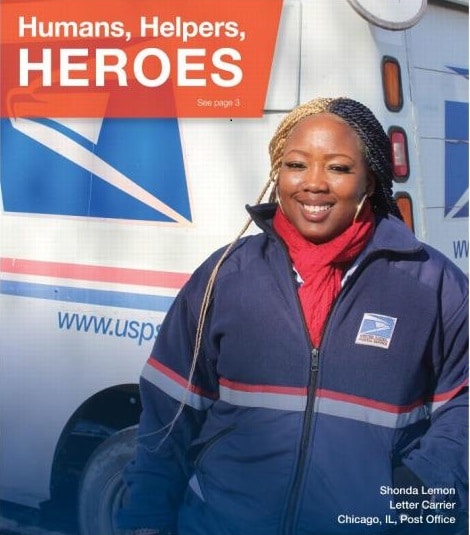 Letter Carrier Shonda Lemon was making deliveries in a Chicago neighborhood when she grew concerned about an 89-year-old customer, Helen Iwanski, whose mail was piling up.

Lemon contacted police and asked them to check on Iwanski, who was found in dire need of medical attention after falling several days earlier. The customer was rushed to a hospital.

When police called Lemon to tell her Iwanski was alive, “I was just so overwhelmed, I cried,” she later told CNN, one of many U.S. and international media outlets that covered the story. The woman’s family was grateful for the Postal Service™ employee’s attentiveness.

“She really does look out for people and cares about them,” a niece said.

Lemon, who fondly recalled mutual friendly gestures such as wrapping rubber bands around Iwanski’s mail so the customer could easily grip it and finding pieces of candy attached to outgoing mail for Lemon to pick up, said she was eager to greet Iwanski upon her discharge from a physical rehabilitation facility.

“Each person has an intricate part of your life,” Lemon said, “and you never know how important they’ll be.” The letter carrier also received a plaque and certificate from the Chicago Police Department in appreciation for her lifesaving actions.

Lemon is one of several thousand employees who have been recognized through the Postmaster General (PMG) Heroes’ Program. These men and women have gone above and beyond the call of duty in a variety of situations, such as assisting lost children, getting help for sick or injured customers, spotting fires, and more.

Now in its nineteenth year, the program is based on a simple idea: Postal Service employees know the habits of their customers and the rhythms of their communities and are often the first to notify emergency personnel and render aid when something is wrong.

Employees must be nominated for the PMG Hero Award. Corporate Communications reviews nominations for accuracy, then sends them to the Inspection Service and the Office of Inspector General for approval. Following approval, each nominee receives a commendation letter from Postmaster General Louis DeJoy. Honorees are also featured in “Heroes’ Corner” on the Postal Service’s daily employee news site, Link.

To nominate an employee, complete PS Form 400, Corporate Communications PMG Hero Nomination, and email it to PMG_HeroNominations@usps.gov. To download or print the form, go to usps.link/heroes, where you can also find the “Heroes’ Corner” archives and read more stories about heroic employees.