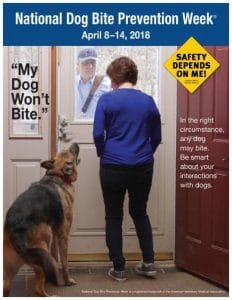 Sponsored by the U.S. Postal Service®, National Dog Bite Prevention Week is a public service campaign that offers safety tips and emphasizes the need for increased owner responsibility in the prevention of dog attacks.

From nips and bites to vicious attacks, aggressive dog behavior poses a serious threat to our employees. To emphasize the enormity of this issue, the Postal Service™ is reporting the number of dog attacks and bites together as the most prominent threat to carriers. Last year, 6,244 Postal Service employees were victimized by dogs.

The tools available in this kit and online will help promote the awareness of this public health concern in an effort to reduce the number of adverse interactions in local communities. Be sure to contact the field communications professionals listed in this kit when promoting this initiative.

How to Avoid Being Bitten

How to Be a Responsible Dog Owner