The chief executive of the U.S. Postal Service was paid less than one tenth of what her counterparts at competitors UPS and FedEx received last year.

Postmaster General Megan Brennan’s salary during Fiscal Year 2016 was $286,137, the USPS revealed today in a financial statement (Page 72 of this PDF). The total value of her compensation was $904,784, mostly from a nearly $600,000 increase in the value of her pension (perhaps because she reached 30 years of service with the agency).

Frederick W. Smith, Chairman and CEO of FedEx, earned nearly $1.3 million in base pay, $7.4 million in bonuses, and $7.6 million worth of stock options in a compensation package that totaled $16.8 million in the company’s 2016 fiscal year. 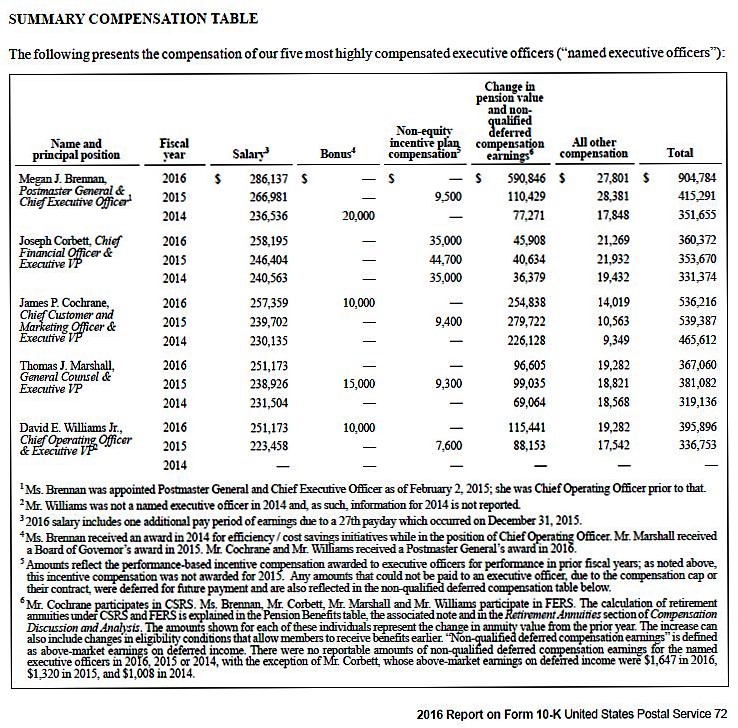 The USPS’s top five also average 26 years of service with the agency. That’s no wonder: The Postal Service couldn’t pay a middle manager from UPS, FedEx, or another major corporation enough to take a top position at the agency, so its executives are mostly lifers who came up through the ranks.

Brennan is one of the highest-paid federal employees, but not the highest. The President of the United States gets a $400,000 base salary, free housing, domestic help, a personal chef, use of a really cool jet — and upon retirement a huge pension and an even huger library.

One thought on “PMG’s Salary is $286,000 – one tenth of what UPS and FedEx counterparts receive”