Today’s Postal Service financial report shows a $610 million operating profit for Fiscal Year 2016, demonstrating the strength of the postal turnaround. USPS now has three straight years of operating in the black, with a total operating profit of $3.2 billion since 2013.

That’s impressive for a government entity that gets no taxpayer money—earning its revenue instead by selling stamps—while enjoying strong public support and providing Americans and their businesses with the industrial world’s most affordable delivery network.

Importantly, these operating profits stem from two ongoing structural factors: As the economy gradually improves from the worst recession in 80 years, letter revenue is largely stabilizing. And as the internet drives online shopping, package revenue is rising sharply (up 16 percent this year), auguring well for the future. Record worker productivity also contributes. 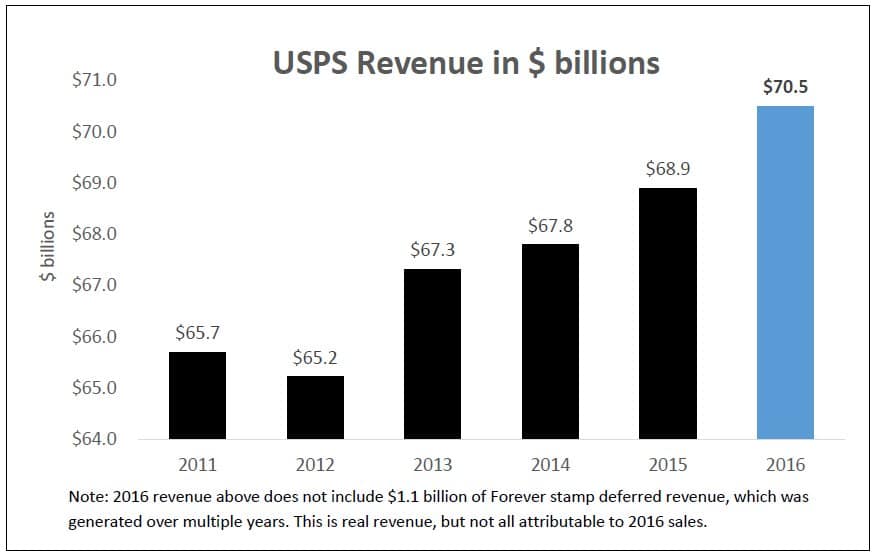 The Postal Service’s operating profits have been driven by improved letter/package revenue. Source/details

The red ink you hear about has nothing to do with the mail but rather with congressional politics—the 2006 decision by a lame-duck Congress to compel the Postal Service to pre-fund future retiree health benefits. No other public agency or private company has to do this even one year in advance; USPS must pre-fund these benefits decades into the future. That $5.8 billion annual charge is the “red ink.”

The pre-funding issue can be readily addressed if Congress acts on practical, targeted postal reform. There is a strong consensus within a coalition consisting of the Postal Service, postal unions, businesses, mailers and industry groups, as well as key legislators, for a reform package that all stakeholders can buy into, including addressing pre-funding, allowing USPS to use its invaluable networks for some new products and services, and adopting best private-sector practices in investing the USPS retiree health benefits fund. Our coalition will work with Congress to overcome the short-term impact of the rate roll-back and move legislation.

It’s worth noting that the year’s operating profit would have been $1.6 billion had it not been for the first annual stamp price rollback since 1919. That rollback, which took place halfway through the fiscal year (in April), makes little financial sense, because USPS already has the industrial world’s lowest rates. Nonetheless, the adverse effect on postal revenues should be short term, with the Postal Regulatory Commission’s legally mandated review of the postage rate-setting system starting early next year. We are confident that the PRC will restore rates to sensible levels before implementing a new system.