By Eric Katz – January 16, 2015
The new chairman of the House Oversight and Government Reform Committee, Rep. Jason Chaffetz, R-Utah, has taken steps to distance himself from the panel’s previous leadership.

Apparently, Chaffetz meant that not just philosophically, but physically as well.

The Republican lawmaker announced this week he would remove a portrait of Rep. Darrell Issa, R-Calif., his predecessor as committee chair, from the public hearing room. Issa’s portrait, along with all previous chairmen, will be moved to private conference rooms.

In their stead, Chaffetz and Ranking Member Elijah Cummings, D-Md., have decided to hang photos of U.S. Postal Service workers and “other everyday Americans,” according to Politico. USPS falls under the oversight committee’s purview. Issa worked aggressively to pass postal reform, and Chaffetz has promised to continue that effort.

Chaffetz has vowed to change the tenor of his committee, and has touted his outreach to Cummings. While Issa and Cummings were able to come together on certain pieces of legislation, their relationship was strained and hearings often contentious.

“Only someone with a massive inferiority complex would go to the extreme and somewhat unprecedented step of having every former chairman’s portrait removed — especially when the obvious intent is to avoid having Chairman Issa’s portrait hanging over his shoulder for the next few years,” a former committee staffer told The Hill. “It’s both childish and extremely disrespectful.” 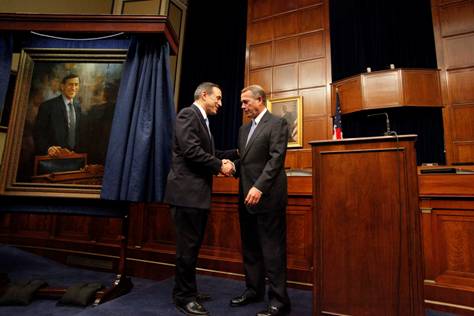 At a ceremony to unveil the portrait in November — memorialized in this photo circulated by his staff at the time —  Issa said he was proud of his accomplishments as chairman.

“We have grown the role of oversight and fulfilled the role the founding fathers intended,” said Issa, who no longer serves on the committee at all. “We have asserted our duty as stewards of the taxpayers’ money and served as an effective check on the Executive Branch. We have made a difference.”

He added: “This committee has a bright future ahead of it and I am deeply honored to be part of its history.”

Turns out, Issa — who had to pay for the portrait out of pocket due to a relatively new ban on using federal funds to finance congressional portraits — will be a less prominent part of its history than he thought.