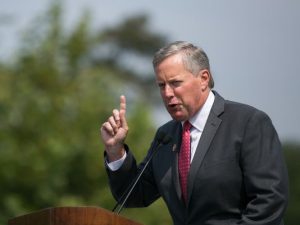 Last year, an Inspector General report revealed that one Environmental Protection Agency (EPA) employee was viewing as much as 6 hours of pornography a day in his office on his government computer. The same federal employee was found to have downloaded as many as 7,000 pornographic files onto his government computer. To date, this employee has yet to be fired and we continue to learn of similar bad actors.

“It’s appalling that it requires an act of Congress to ensure that federal agencies block access to these sites,” Congressman Meadows said.

“While there are rules in place at most agencies to ban this kind of unprofessional and potentially hostile workplace behavior, it continues to take place. There is absolutely no excuse for federal employees to be viewing and downloading pornographic materials on the taxpayers’ dime,” Meadows added.

“Further, downloading these files, which are often ridden with viruses and malware, poses a cybersecurity threat at our federal agencies. This commonsense legislation ensures that federal workers have a comfortable, safe work environment and protects taxpayer resources from being misused,” Meadows said.

Mark Meadows serves on the House Oversight and Government Reform Committee where he chairs the Subcommittee on Government Operations.