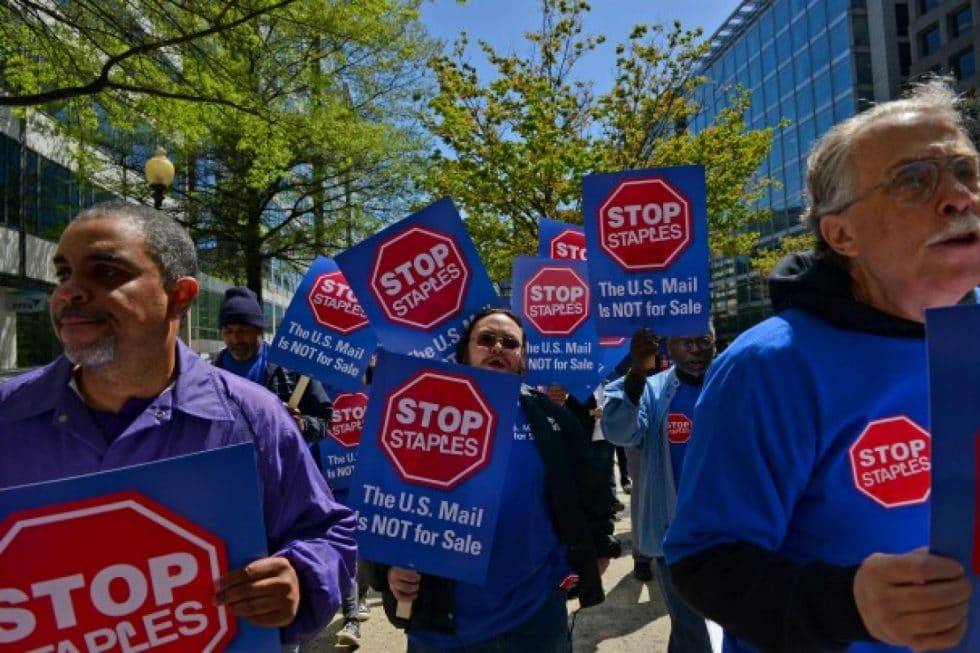 Peter Menge, along with national leaders and local members of the American Postal Workers Union (APWU) make their way from Farragut Square to a Staples’ store in Northwest Washington to protest a USPS-Staples deal. (Marlon Correa/The Washington Post)

By Lisa Rein – February 12, 2015
The American Postal Workers Union will join other labor and advocacy groups Thursday to announce a new coalition designed to “save” the U.S. Postal Service from service cuts and efforts to privatize the mail system.

The coalition of 63 religious coalitions, retiree organizations, educational and postal unions, lawmakers and progressive advocacy groups is calling itself “A Grand Alliance to Save Our Public Postal Service.”

The founders’ goal is to save the mail agency from what they describe as unnecessary, draconian responses to the financial losses caused by plummeting mail volume. Five-day delivery; the closing of mail-sorting hubs; reduced hours at neighborhood post offices; Staples counters turning into quasi post offices; the shift to lower service standards — these changes have been enacted and proposed by postal officials in recent years as the agency’s budget problems worsened.

For labor unions, they’ve ushered in a smaller workforce and shrunk economic opportunities for postal employees. For the Postal Service, they’ve been painful but necessary responses to a financial crisis.

Two things are prompting the unions and their allies to coalesce now. The Postal Service has a new leader, Postmaster General Megan Brennan. And the APWU, which represents 190,000 clerks, plant and maintenance workers, truck drivers, mechanics and support employees, start bargaining next week for a new contract. The current five-year pact expires in May.

“Is this a post office that’s reducing hours, shutting plants, delivering mail three or four days a week or is it a post office that can take on new things that bind the nation together in an ever deeper way,” APWU President Mark Dimondstein said in an interview.

“There’s a change in leadership,” he said. “We hope some of our ideas will be met with an open mind.” He said the “public” post office “is in danger and on a downward spiral,” in part because of threats from privatization.

One of the union’s most intriguing strategies will be an effort to bring postal banking to the bargaining table, along with expanded passport and notary services and hunting and fishing licenses. Labor and other advocates have advocated that the agency offer financial services to meet the needs of underserved communities, a move that would preserve jobs and add new ones.

The banking idea  took off a year ago when the Postal Service inspector general suggested  that postal officials could earn $8.9 billion in annual revenue if they captured 10 percent of the interest and fees generated by the 68 million Americans on the fringes of the banking system. The suggestion was well-received in many quarters.

Such a massive change would require congressional approval, which is unlikely given that over four years Congress has been unable to agree on a financial package to reverse the agency’s losses.

But Dimondstein said it’s not clear that Congress would need to approve the shift to banking services. He said one way to ensure that they could be offered without controversy would be a pilot program.

“A third of the Zip codes in America don’t have a bank,” he said.

Postal officials did not respond to a request for comment about the new coalition.

The coalition plans to kick off with a news conference at 2 p.m. Thursday at the National Press Building in Washington. Actor Danny Glover, whose parents and siblings were postal workers, is featured in a short video supporting the coalition.

via Postal unions, advocacy groups join forces to ‘save’ USPS – The Washington Post.