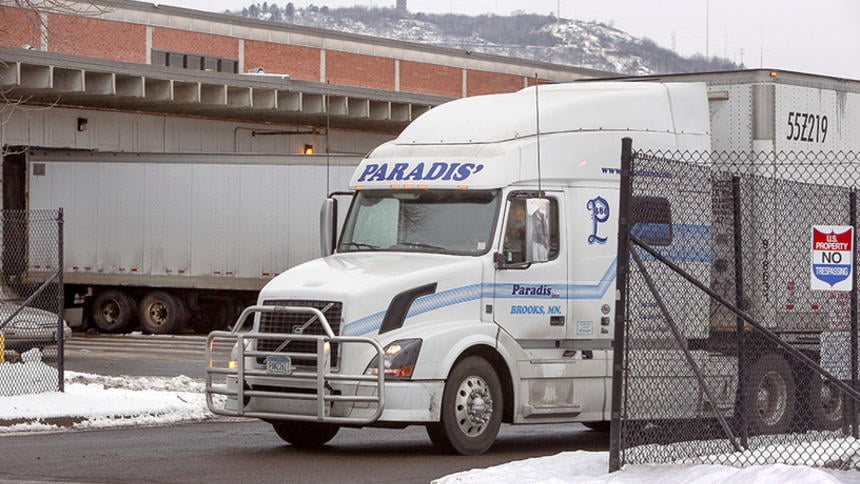 A semitrailer leaves the Duluth mail processing center in Lincoln Park in December. The facility is scheduled to close soon, with work transferred to the Twin Cities. (File / News Tribune)

The employees aren’t being laid off and Postal Service staff will be working with the Duluth employees and unions to find other positions within the organization, Rupert said — though that could require a move from Duluth.

After the processing center closes, 36 mail clerks will remain in the facility on the 2800 block of West Michigan Street, which serves as Duluth’s main post office.

A group of about 200 impassioned postal workers, elected officials, and community members rallied on Oct. 6, on the steps of the Federal Building in Duluth, MI, to save the city’s mail processing center. (via APWU / click image to enlarge)

The closure has been discussed and debated for a long time, but now it’s starting to sink in for employees, said Todd Fawcett, representing the American Postal Workers Union, one of four local unions affiliated with the Postal Service. The affected employees haven’t had any meetings to discuss possible transfers to other positions and they probably will start to search for new employers, he said Friday.

Fawcett encouraged residents to contact their congressional representatives about the processing center in Duluth.

“This is congressional inaction. … Call your congressman, call your senator, save jobs,” he said.

Duluth’s mail processing center isn’t the only one in Minnesota that’s slated to close this year. Processing centers in Bemidji, St. Cloud and Mankato are expected to close in July, and mail from those centers will be processed in Minneapolis once they are closed.

Along with Minnesota Gov. Mark Dayton and Duluth Mayor Don Ness, Minnesota’s congressional delegation has requested in the past year that the four mail processing centers in nonmetro Minnesota remain open. A rally was held last fall in support of Duluth’s processing center.

A 2011 study showed the Postal Service would save nearly $4 million by closing the Duluth mail processing center.

The consolidation process is due to a decrease in first-class stamped letters being sent, Rupert said. The Postal Service has been good about reducing its costs and has been implementing the changes in a stepped process to ensure that they get it right, he said.

Residents shouldn’t see a change in mail delivery with the closure of the processing center because it’s a behind-the-scenes change, he said. The mail will continue to be sorted at night in the Twin Cities as it has been in Duluth, he said.

“It’ll be seamless for our customers,” he said.

Critics of the closure plan, however, have contended that the move will compromise the Postal Service’s delivery standards.