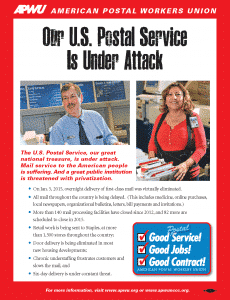 03/23/2015 – Three in-depth flyers and a brochure just published by the APWU dispel common misconceptions about the Postal Service.

“With contract negotiations underway, it’s important for union members – and the public – to know the truth about the Postal Service’s phony financial crisis, the threat of privatization, and the potential for expanded and enhanced postal services,” said APWU President Mark Dimondstein.

“I encourage union activists to pass out the flyers in break rooms and cafeterias as they discuss the contract campaign with their co-workers,” he said. Flyers have been mailed to local presidents for distribution.

The information is also available in a brochure format, which can be used when speaking with allies and potential allies. “I hope APWU activists will distribute the brochures at meetings with local labor councils, state federations, community organizations, elected officials, the media, and others,” Dimondstein added.

“APWU members across the country are doing outstanding work – building unity, enthusiasm and activism in our campaign for a good contract. Members are involved at every level of the organization – in Contract Action Teams, locals, state organizations, retiree chapters and the APWU auxiliary,” he pointed out.

“With your continued activism, we will fight to protect our vibrant, public Postal Service for generations to come!”

via Setting the Record Straight | APWU.