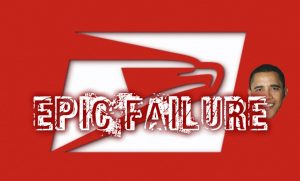 A great deal of our speech with public policy is often coded — for example, “makers and takers” can often sound a lot like “black and white” — but in this case Henderson and his successor Jack Potter were pretty clear about their goal. The way forward for the Postal Service, they said, would include cuts to the workforce, post office closings, a smaller postal infrastructure, and a general retreat from the idea of the Postal Service as a universal service provider.

In focusing on the idea of a “failed business model,” these voices were able to elude facts like the billions siphoned out of the Postal Service to support payments to the Retiree Healthcare Benefit Fund that were essentially unnecessary. Any discussion of rationalizing rates in ways that didn’t involve simply handing over postal revenues to narrow interests in the mailing community was avoided. The idea of supporting universal service and postal infrastructure with modest budget contributions from the federal government was rejected.

Instead, everyone seemed to agree that the nation’s postal infrastructure must be totally self-sufficient. That was the preference of postal management as well, since money from Congress never comes with no strings attached. Management takes every opportunity to remind people of this. At the end of every press release is this sentence: “The Postal Service receives no tax dollars for operating expenses and relies on the sale of postage, products and services to fund its operations.” …
…

Mr. Obama’s rhetoric about economic inequality and the problems that result in redistribution of wealth upward in our current economy is often not matched by his policies or his appointments. That is nowhere truer than in the case of postal issues.

Unfortunately, Mr. Obama’s latest appointments to the BOG will not help solve anything. Instead, they’re part of the problem. The basic structure of the Postal Service is flawed. In a typical corporation, the board of directors is ultimately accountable to shareholders. Boards are often not as responsive as they should be, but at least the shareholders serve as a check.

The USPS Board of Governors is accountable to no one. It has the power to determine national policy for an essential infrastructure, but it has no accountability to the general public.

The two great pieces of postal legislation — the PRA of 1970 and the PAEA of 2006 — have reshaped the post office into a corporate model, as if that’s the solution to everything. But for the average American, the corporate economy has stopped working.

Worse yet, the statutes that govern the Postal Service, the management that guides it, and the systems that regulate it, all fail to recognize the postal network as public infrastructure. Over the last 45 years since PRA, the Postal Service has done a credible job in delivering more mail to more addresses at more reasonable prices than any postal system in the world. But it has done this in spite of rather than because of its management.

The sad reality is that the managers of the Postal Service, in conjunction with politicians, have worked to undermine the effectiveness of a public infrastructure that is capable of producing broad economic and social benefits.

The latest bunch of nominees to the BOG will take us further down the path into the darkness of privatization. We will inevitably see further degradation of the network, more job losses, and greater deterioration of service. In the end, it’s not just the Postal Service that will suffer but the American people.

Read entire article: Epic Fail for the Postal Service: The wrong model and the wrong BOG | Save the Post Office.