We Won!! – The USPS and Staples Deal is Over! – 21st Century Postal Worker 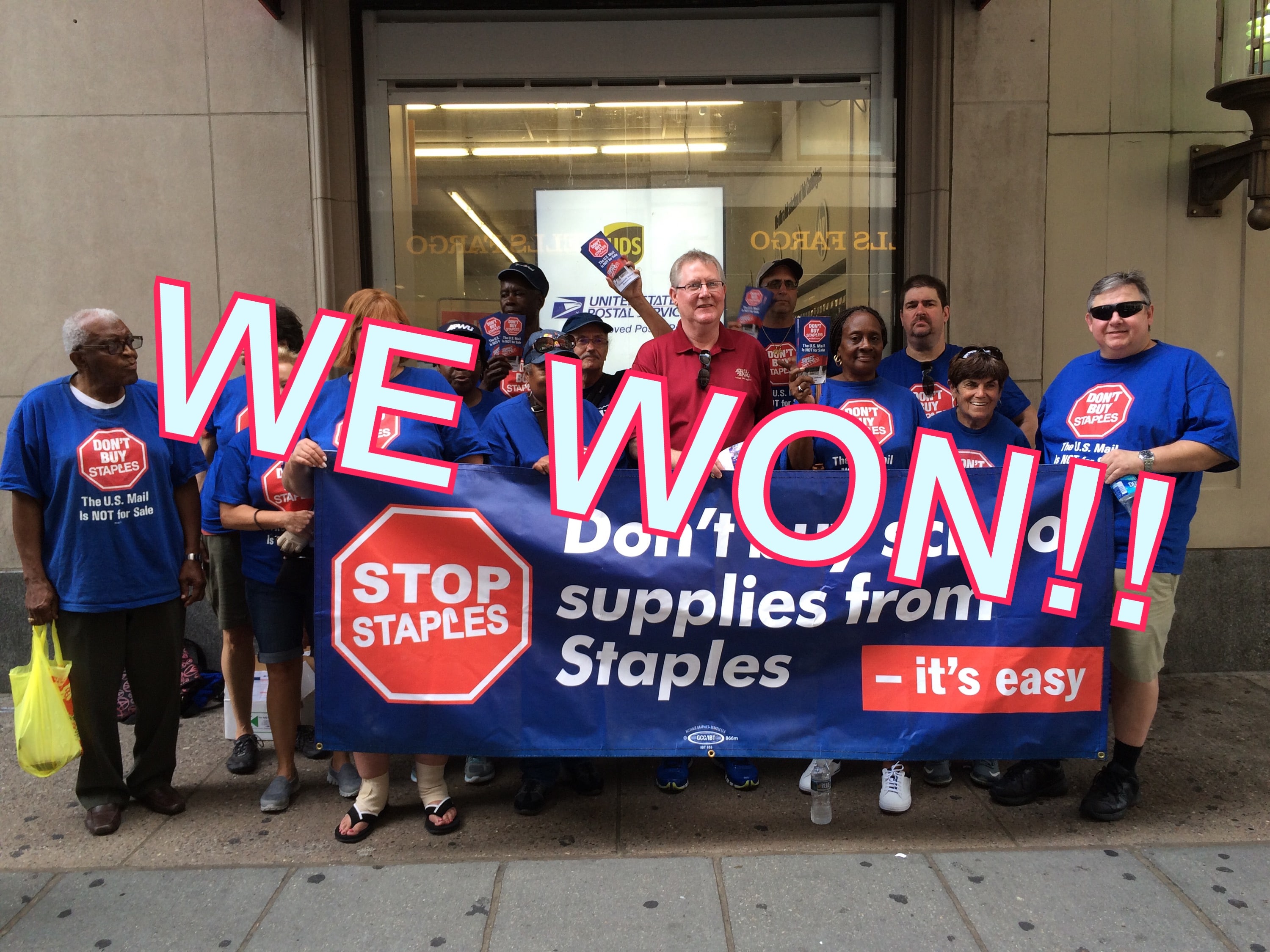 01/05/2017 – Postal management informed the APWU in writing that the “Approved Shipper” program in Staples stores will be shut down by the end of February 2017. This victory concludes the APWU’s three-year struggle. The boycott against Staples is over!

“I salute and commend every member and supporter who made this victory possible,” said APWU President Mark Dimondstein. “I never doubted that if we stayed the course, stuck together and kept the activist pressure on, we would win this fight.”

“The Staples pilot was an acceleration in the privatization of retail services and a direct assault on our jobs,” said Dimondstein. “It was time to draw a line in the sand.” “We wasted no time swinging into action,” Dimondstein continued. 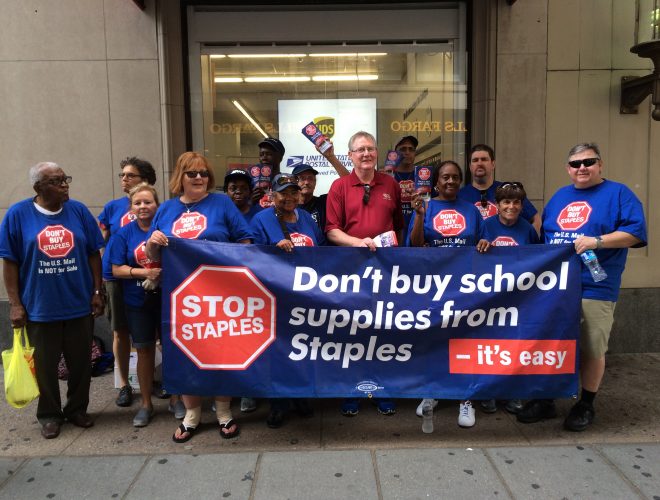 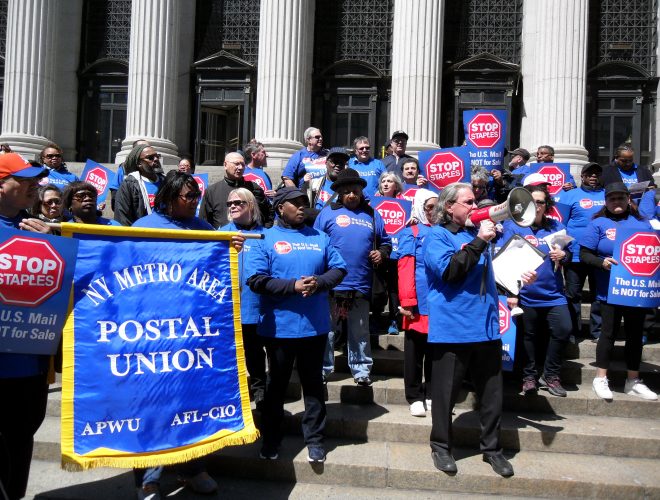 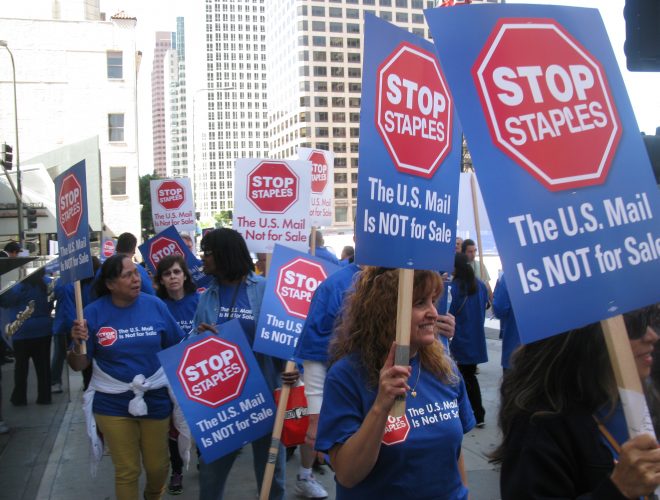 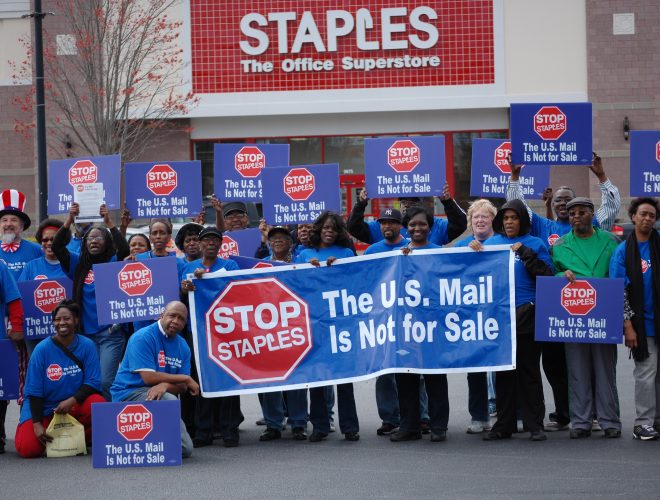 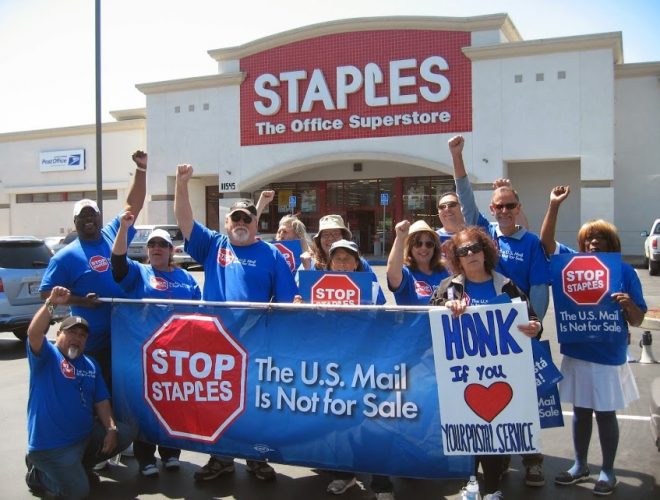 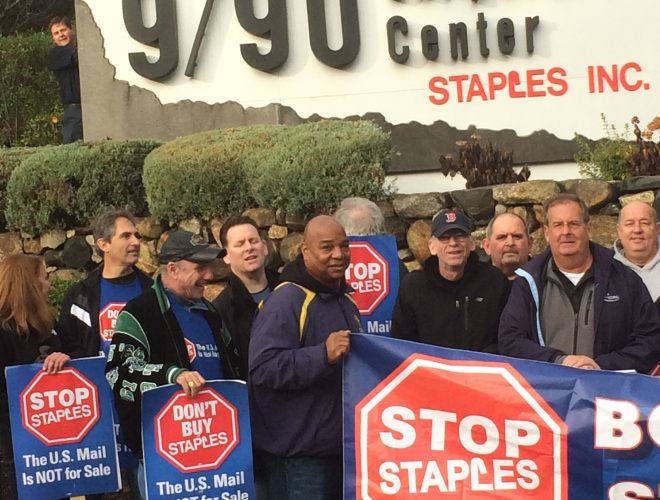 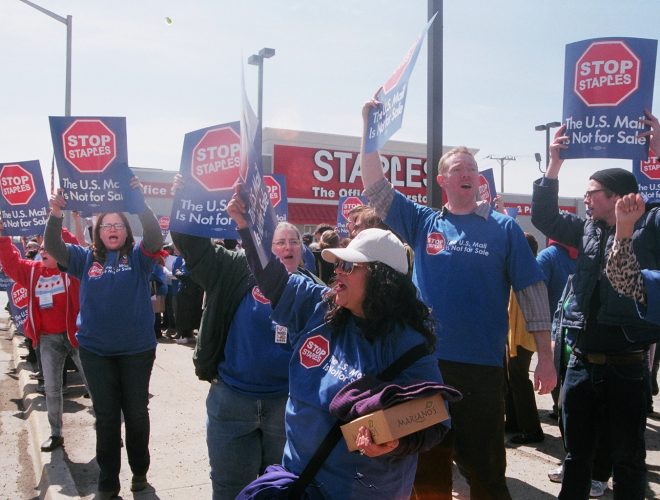 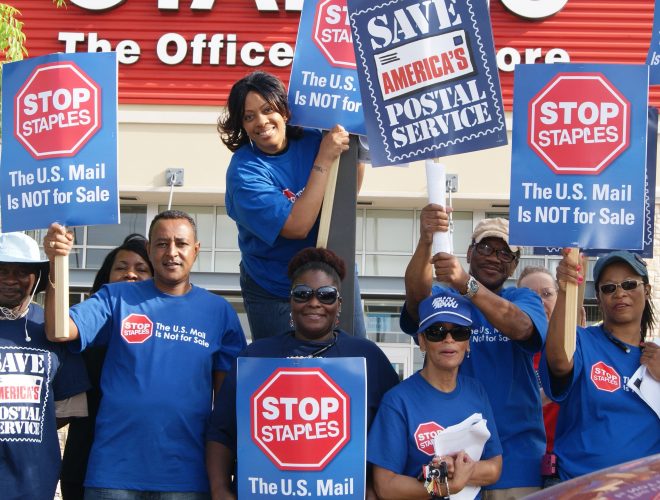 Early in 2014, the Stop Staples campaign started to put pressure on Staples and the USPS. On April 24, 2014, APWU members staged a country-wide National Day of Action with 56 Stop Staples protests in 27 states. After this, the APWU launched the official Staples Boycott.

The APWU delegates to the 2014 National Convention reaffirmed the Stop Staples fight, authorizing necessary resources for the campaign. A thousand delegates took to the streets in front of a Staples store in downtown Chicago, IL, proclaiming, “The U.S. Mail is Not for Sale!”

“If Staples was going to take our work and jobs for their private profit, we were going to hit back and affect their bottom line,” Dimondstein explained. The APWU launched StopStaples.com where tens of thousands pledged to join the boycott. The union also engaged in a postcard campaign which resulted in over 100,000 postcards delivered to Staples’ CEO.

The entire labor movement showed great solidarity with the APWU. Many national unions endorsed the boycott including large teacher unions, the American Federation of Teachers (AFT) and the National Education Association (NEA). The other postal unions enthusiastically supported the campaign. The 12 million worker-strong AFL-CIO added Staples to their official boycott list. UNI the Global Union, an international union association, endorsed the Staples boycott urging all of the affiliated unions throughout the world to put pressure on Staples, since the company does business in 26 countries. Dozens of state AFL-CIO federations, local unions, Central Labor Councils, community allies and city councils passed resolutions endorsing the boycott.

Kept Up the Pressure

The fight continued for another two and a half years, but APWU members did not give up. Constant pressure was maintained, especially in Atlanta, Boston, New York City, Philadelphia, Pittsburgh, and the San Francisco Bay Area. Protesters held signs and distributed leaflets in front of Staples stores across the country. APWU members and supporters spoke with prospective Staples customers and answered questions about what the protest was about and why they should not shop there. Many customers chose to respect the boycott.

In February 2015, the APWU released two research papers critical of Staples’ proposed $5.5 billion merger with Office Depot and met with the staff of the Federal Trade Commission (FTC) examining the merger. The FTC eventually blocked the merger and Staples was forced to pay a $250 million penalty to Office Depot.

The APWU carried out investigations that proved Staples was shortchanging the Postal Service in revenue, undermining the security of the mail and trashing the Postal Service’s brand. The union requested a USPS Office of Inspector General (OIG) investigation that further proved these facts. The APWU won a series of cases before the National Labor Relations Board culminating in a recent Administrative Law Judge’s decision that said the USPS failed to bargain with the union over the subcontracting of postal work to Staples.

“This is not only a victory regarding the Staples’ dirty deal,” Dimondstein said. “In regards to the USPS’s planned retail privatization expansion to dozens of other corporations, those companies have largely backed-off and gotten the message – mess with postal workers and customers and you will have to tangle with the APWU family!” 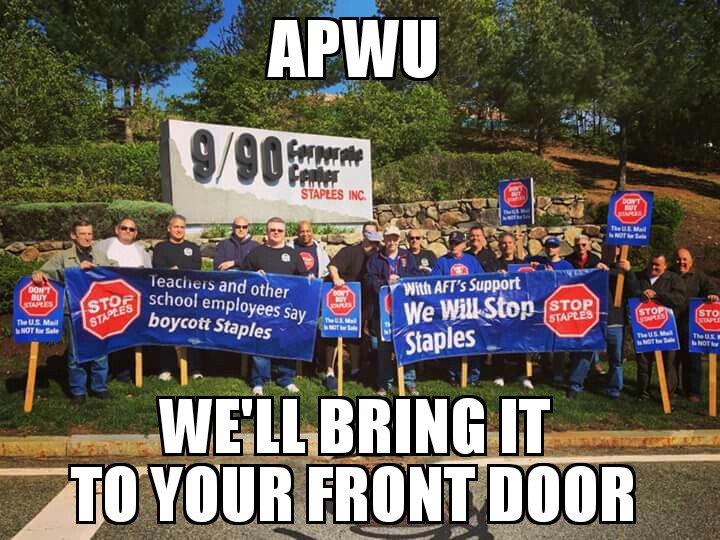 “With the Staples deal out of the way, there is a fresh opportunity for postal management and the APWU to consider the future expansion and improvement of retail operations without these misguided privatization schemes that undermine great service, good jobs, and a strong postal brand.” President Dimondstein said.

President Dimondstein applauds “the many local and state organizations that joined in the fight; our retiree and auxiliary chapters who stepped up with enthusiasm; APWU National officers and staff who stayed the course; and especially the many Stop Staples activists, active and retired, career and non-career, who worked day-in and day-out to see this struggle through and were the heart and soul of the campaign.

“A job well-done, Sisters and Brothers!” said Dimondstein. “The struggle continues and this victory helps strengthen and steel us for the battles ahead.”

One thought on “We Won!! – The USPS and Staples Deal is Over!”