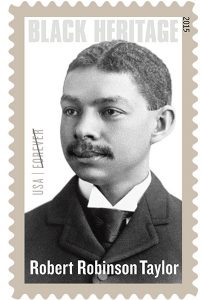 February is Black History Month — a time to celebrate the heritage of African-Americans and their contributions to the nation.

The observance began in 1926 when Carter G. Woodson, founder of the organization now known as the Association for the Study of African American Life and History (ASALH), promoted Negro History Week, which was held each February.  In 1976, Negro History Week was extended to a one-month observance. Today, it’s designated as Black History Month or African-American History Month.

The Postal Service has honored the contributions of African-Americans since 1940, when Booker T. Washington was featured on a stamp.

Robert Robinson Taylor will be honored on the 38th Black Heritage stamp, which will be issued in February.