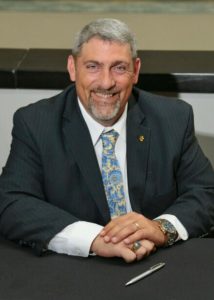 Hello APWU members and retirees. My name is Thomas Benson and I’m currently President of Local 1204 and Director of Veteran Affairs for the Ohio Postal Workers Union.

I am proud to announce my intent to run for the office of APWU Legislative/Political Director during this year’s APWU National election. As you are well aware, these are trying times for all the Postal Unions and the members. Under DeJoy, we are seeing a slow yet steady approach to privatization. We need strong, smart and effective leadership at APWU National who will fight for the members and retirees. I know I am the right person for the APWU Legislative Director.

The Legislative Department must, MOTIVATE, ACTIVATE, and EDUCATE the members on the political process. I will work on training programs that all members and officers can understand. I will then work with the locals on setting up Town Hall meetings, reaching out to State Legislators and educating the public on our fight. The verbiage is true…”MORE POWER IN NUMBERS”.

As Legislative Director, I will NEVER use yours or retirees’ benefits as a bargaining chip. The job of a union is to fight for better benefits and contract enforcement, not give away your benefits like the current administration has done. An injury to one is an injury to all, and I will fight for each and every one of you.

I will work with Congress on repealing the Government Pension Offset and Windfall Elimination Provisions. The two provisions have created steep hardships for those who have met the requirements for Social Security benefits but are penalized for previous employment under the CSRS.

As Legislative Director I will put out a bi-weekly podcast so all members can be informed as to what the Legislative Department is working on. I’m a firm believer in keeping information flowing. Transparency is a must when it comes to the fluidity of the political process. Under the current administration, there has been support for congressional bills that would be harmful to members as well as retirees. We the members have never been given a truthful reason as to why we would support legislation that takes away choice from the members and retirees. If it was in the members best interest, then there should be no reason to keep secrets. As Legislative Director I will make transparency a vital component of the department.

Now we see beginning efforts to privatize the USPS. I was very open last election, that support for bad legislation would open the door to even worse attacks against the postal worker. The Legislative department cannot be short sited, they must look 5, 10 and 20 years down the road. The Legislative department of the APWU has become reactive rather than proactive. We must change the direction the APWU is headed or we will not recognize the USPS and the APWU in 5 years. The members must come first.

I’m proud to be a blue-collar worker and understand the issues the postal workers go through daily as I will be coming from the workroom floor. To many in DC have collected a six-figure income for to long and can no longer relate to the daily issues we postal workers see. I have not spent 20 plus years at the National Union collecting a six-figure salary. I have not been tainted by the Union politics that is so evident in DC. I am one of you and I will be taking your voice to DC.

After careful consideration and seeing an obvious decline in the Legislative department, I am proud to announce my intent to run for Legislative and Political Director of the APWU. I will bring back respect, dignity and core union values back to the Legislative Department. It’s not about the salary, it’s about the reality of the fights ahead of us. As a current employee of the USPS, with at least 12 years left in my career, every choice and decision I make will have the members best interest at hand. I will not have the option to support bad legislation and just retire and not face the consequences of my choices. The fact is, I’m one of you. I’m an active member, who works the on the workroom daily and the President of Local 1204. I will have every member and every retiree’s best interest in mind in every decision I make.

I am asking for your support and your help to make the APWU’s Legislative Department strong again.

One thought on “Thomas R. Benson Announces His Candidacy For APWU Legislative/Political Director”