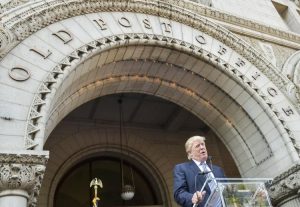 While the USPS still exists, it is a shadow of its former self, having been intentionally undermined by the U.S. Congress. The “reform” of Post Office finances in 2006 has damaged that venerable institution, and some proponents of reform stated that they passed the legislation with the aim to hamper the institution’s functioning. This move occurred after a study showed that the Post Office was a popular institution because it gave citizens a regular and largely positive interaction with the federal government. In small town America, the Post Office served as a community center as well as a one-stop shop for dealings with the national government. For those bent on reducing the size of the federal government, the fact that voters approved of the Post Office represented a barrier to their goals. Through some highly unconventional financing arrangements (sold as making the Post Office pay its own way but actually placing extraordinary financial burdens on it), the USPS was seriously hamstrung.

The advocates of this scheme claimed that the USPS had become obsolete. With the rise of the internet, they said, access to information was easier and the Post Office less necessary. People no longer got their information through the Post Office (they claimed), therefore protecting that institution and providing cheap mailing rates to those who sought to send news in various forms through the mail no longer made sense. The modernization argument suggested that the institution had simply outlived its usefulness, even though some admitted that they aimed to eliminate the Post Office as part of the effort to reduce the positive impact of the federal government, especially on rural America.

Killing the USPS was part of a larger effort to relinquish the federal government’s long-standing commitment to create an informed citizenry. With the Post Office drastically reduced and the airwaves deregulated, the government gave up trying to make accurate information readily available. Among those who no longer valued access to accurate information, an attack on public education was the next logical step. That effort is now well underway. The President-Elect has given a boost to the effort to kill universal public education by naming Betsy DeVos, a person with no love for and absolute no experience in public education to head the Department of Education. A cynical reading of these developments would suggest that those who undermined the Post Office and who seek to privatize education hope to gain from an ill-informed citizenry. Certainly the government’s historic commitment to creating an informed citizenry has been weakened if not abandoned entirely.

That the advocates of an end to the Post Office, the deregulation of the airwaves, and the privatization of education claim to care what the founders thought amounts to a great irony. The founders told us what they valued: a well-informed and well-educated citizenry, and they created the Post Office to support it.